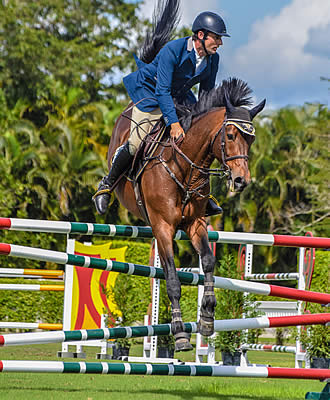 Wellington, FL (February 17, 2019) – A love for horse sport was in the air during Valentine’s Day week on the Turf Tour. Gorgeous grass fields combined with world-class talent and full divisions of show jumping to once again create a spectacular atmosphere for both horses and riders. Due to inclement weather, Wednesday’s $5,000 1.30m Rising Star Classic was postponed to Thursday, where sunny skies and exceptional footing set the pace for Valentine’s Day on the Turf Tour.

The Valentine’s Day $5,000 1.30m Rising Star Classic saw Brianne Goutal-Marteau and Cylana top the standings, jumping-off to a time of 31.554. As one of the first few riders to take the field, Goutal-Marteau put in the day’s first double clear effort aboard Zernike K with a time of 32.362. Zernike was barely bested by barn mate Cylana for the day’s top prize; both horses are owned by Rose Hill Farm. Daniel Bluman and Euphoria swept to third in 33.249 seconds.

The following day, twenty entries lined up to test their mettle against the day’s headline $15,000 1.40m Turf Tour Grand Prix. Germany’s Christoph Schroeder and Gk Performance Horse’s bay stallion Diamant de Revel ultimately claimed victory with a double clear effort and jump-off time of 38.869. Mario Garcia and Fabries put in a spectacular effort, galloping to a final time of 38.948 and second place, less than a tenth of a second behind Schroeder. Luis F. Larrazabal and Anastasia Blackman’s Warwin rounded out the top three, and the pair was also the first double clear effort of the day.

While the Turf Tour attracts top riders including Olympic Gold, Silver, and Bronze Medalists, it is also a place for young riders, green horses, or newly formed horse and rider combinations to get their bearings and strengthen their talents. Kaylee Croyle and Segrado, in their first ever outing on the grass, won their 1m Jump-off class. Segrado, who is owned by Tammy Rubio, was back in action with Croyle after a few years apart, and, with the help of trainer Amy Foster, enjoyed the Turf Tour’s exceptional atmosphere and footing to rekindle their relationship. “I was so surprised I won as we had a few miscommunications,” said Croyle. “This was my first time ever competing on the grass and it was definitely something I think everyone should experience.” Segrado, who seemed very proud of himself wearing his blue ribbon, was determined to eat Croyle’s sandwich from The Ridge’s complimentary hospitality tent and cut the interview short.