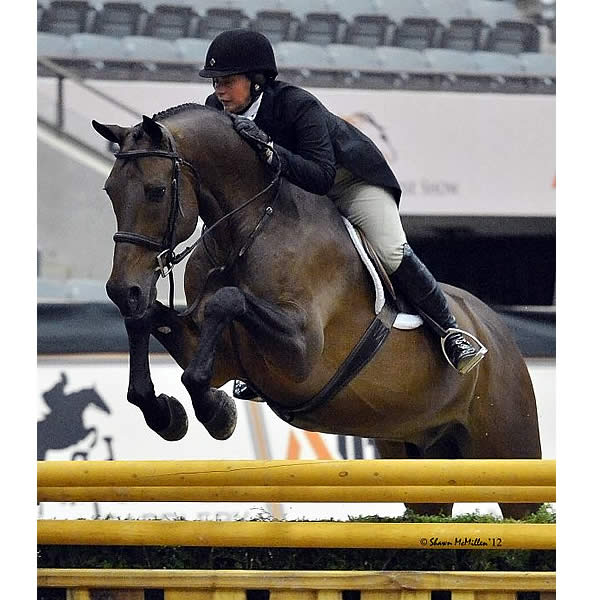 Jennifer Alfano and Timber Ridge rode to the top of the leader board in the Regular Conformation Hunters during HITS VI Ocala Masters. Photo By: Shawn McMillen

Ocala, FL – February 26, 2013 – With the winter circuit halfway over, SBS Farms Inc. has only continued to shine at the HITS Ocala series. Professional rider and trainer Jennifer Alfano has been piloting various mounts to top positions and bringing home tricolor ribbons every week, and the HITS VI Ocala Masters was no different for the exceptional rider. At the end of the week, Alfano had accumulated two more championships, courtesy of famed Jersey Boy and the up-and-coming Timber Ridge.

Alfano and Jersey Boy are the team that can’t be beat. After allowing Miss Lucy, Rose Hill and Maggie May a week to take a break, Alfano was proud to maneuver Jersey Boy around the hunter courses. Jersey Boy put his best foot forward in the High Performance Hunters, riding to three blue ribbons and one second place ribbon, dominating the division and taking the victory. This was Jersey Boy’s first competition since he claimed the derby victory in Jacksonville, FL, during the first week of February. With outstanding courses, he won the first round and cruised to a second place in the handy round to clinch the title with his seemingly flawless performances.

Timber Ridge, owned by Shane George, a recent mount for Alfano, proved to be a worthy teammate, when he captured the championship in the Regular Conformation Hunters this past Thursday. With his dashing good looks, Timber Ridge claimed the blue ribbon in the model. Alfano and Timber Ridge have started to impress the judges and their high placings reflect such. Over fences, the two garnered the blue ribbon, third place, fourth place, and took the third in the handy round. They also were victorious in the under saddle with another blue ribbon.

Earlier in the day, Alfano and Call Me competed in the First Year Green Hunters. Call Me, owned by Susie Schoellkopf and SBS Farms, had consistent rounds, taking home two sixth place ribbons. The pair was also awarded a fourth place ribbon for their efforts over fences. Alfano and Call Me have only shown the past two weeks, but their relationship is continuing to blossom as they prove consistency throughout the division.

Alfano’s final mount for the week was Me Again, owned by Helen Lenahan. The two were the first to compete for the week, showing Wednesday morning. Me Again and Alfano wowed the judges with their skills and were presented with second place ribbon over fences, as well as winning the fifth place over fences.

Based out of Buffalo, NY, SBS Farms’ Susie Schoellkopf and Jennifer Alfano run one of the foremost show hunter training operations in the country, and travel nationwide to compete in the nation’s most prestigious horse shows. SBS Farms, Inc. continues the proud tradition of the Saddle and Bridle Club as one of the top show stables in the northeast. Schoellkopf is also the Executive Director of the Buffalo Therapeutic Riding Center, which houses both The Buffalo Equestrian Center as well as SBS Farms. Built in 1922, the 160-stall facility is a historical landmark, with its unique English Tudor and gothic style architecture. For more information on SBS Farms and the Buffalo Therapeutic Riding Center, please visit www.thebtrc.org.