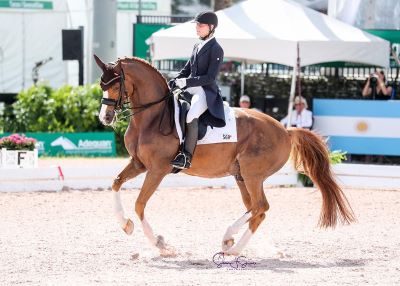 Wellington, FL – February 24, 2022 – The bonanza of dressage in week seven of the 2022 Adequan® Global Dressage Festival (AGDF) continued with the two three-star grand prix classes on Thursday, February 24, 2022. It was a momentous day for Armenian rider Carrie Schopf. The American-born 64-year-old recorded her first international grand prix win with long-time partner Saumur. They posted a personal best of 69.087% to top the Grand Prix CDI3*, presented by Fair Sky Farm, vanquishing 14 other combinations. Americans filled the remaining podium places — a pattern repeated across the day — with Codi Harrison second (67.652%) on Katholt’s Bossco and Jessica Howington and Cavalia taking third with 67.261%, despite an error of course.

Saumur, a 14-year-old Oldenburg gelding whom Schopf competed at the European Championships in Rotterdam in 2019, was fresh and full of energy, even after his test.

“You can see how much energy he has, and sometimes he makes himself tense because he wants to do more than I want him to do,” explained Schopf, who is based in Germany and has ridden Saumur since he was eight. “My goal was to have a test that flowed, and where he felt comfortable and wanted to do his job and to be a team with him.”

Alcazar Is King of the Castle after Break from Competition

After a year out of the CDI ring — and a career of almost 100 international tests — Katherine Bateson-Chandler’s ride Alcazar showed he has lost none of his sparkle. Jane Forbes Clark’s 17-year-old gelding by Contango led the Grand Prix CDI3* (the qualifier for the freestyle), presented by Premier Equestrian, with 68.826%.

“I’ve had him since he was six,” said Bateson-Chandler, who also nursed him back to health following colic surgery in the summer of 2016. “I hate to say he feels like my old shoe, but he does. He had a big break, so I changed up my warm-up this time and it was one of the best, most honest feelings I’ve had in the ring with him.

“It’s really fun to have one that you know that well and you’ve trained yourself,” she continued. “He’s really my friend, and we’ve spent so much time together and been through so many different travels. It’s a nice feeling, when they want to keep going in there and doing it at his age with the amount of showing he’s done.”

A unanimous and high-scoring win in the Prix St. Georges CDI3*, presented by Donato Farms, handed the winner’s sash to Bianca Berktold (USA), riding her own Imperial. First to go in the all-American field, Berktold and the nine-year-old KWPN mare by Charmeur pulled off a 73.000% performance, almost 2% higher than their previous best in this test. Judge at E, Germany’s Katrina Wüst, awarded the pair over 75%. Berktold and Imperial have finished on the podium in all four of their 2022 AGDF starts, and this week marks their first three-star show.