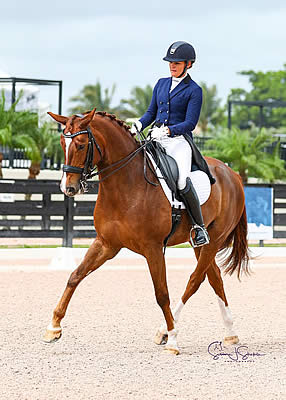 Three combinations picked up tickets for the Future Challenge developing horse finals — which take place in the main Stadium Arena in week 12 — two in the small tour class presented by Summit Farm, and one at big tour, which is sponsored by Lövsta. The lucky recipients at small tour were Sarah Lockman and Heather Blitz, with the big tour qualifying slot going to Jan Ebeling.

It was a bumper week for USA rider Lockman and her mount Balia. The pair topped Saturday’s open Prix St. Georges with over 74%, and followed up with a win in the Future Challenge class at the level on Sunday with 73.603%. The eight-year-old German-bred mare by Belissimo M out of a Florestan dam is owned by the class sponsor, Summit Farm. Lockman bolstered her success by also topping the USEF developing Prix St. Georges class riding her own horse, Dehavilland, by Diamond Hit, to another plus-73% score.

“Balia’s still young and green and we missed a couple of the changes, so if it was a clean test, I think it could have been over 75%,” said Lockman, who is based in California and is spending the season in Wellington for the first time. “It’s been a really great week for both my younger horses. Dehavilland needs ring experience, but I’m really proud of Balia, who we bought from Helgstrand here in Wellington when she was five. She’d only been here about two days.

“Balia’s been a lovely addition to our string of horses,” she added. “She’s also part of the USEF developing program, so they have their eye on her. And I’ve owned Dehavilland since a foal, so it’s really special to have seen him come up from an ugly duckling with a big head and ears — his nickname is Donkey — to his score from today which puts him at number one in the country.

“It’s been a really great start to the season,” added Lockman, who debuted the 10-year-old stallion First Apple, her Pan American Games individual gold medal ride, at grand prix level the previous week, scoring over 70%. “It’s especially good for the young horses to have a horse show available every weekend here. They spend an hour doing their thing, then we go back to my trainer Scott Hassler’s barn and the horses go back out in the field.

“I feel really lucky,” concluded the 31-year-old. “Not many riders have such a pipeline of horses coming through. I feel fortunate to have Summit Farm so behind me in my career and all the help I’ve had from Scott, who has been there since the very beginning with these horses. I feel like I’m set up for the future.”