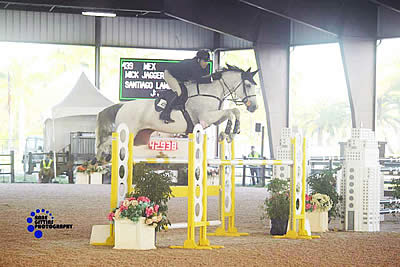 Wellington, FL – October 12, 2020 – The ESP Fall I show closed out on Sunday with the $24,999 Score at the Top Grand Prix in the Van Kampen Covered Arena. A total of 20 competitors challenged the track, designed by Jasen Shelley, before Santiago Lambre of Wellington, FL and Mick Jagger rode into the winner’s circle with a 33.794-second jump-off. Joao Eduardo Ferreira De Carvalho of Delray Beach, FL piloted Karina Rocha Mello’s Volt Du Thot through the timers in 34.247 seconds to claim second place. Juan Andres Rodriguez Silva of Wellington, FL captured the yellow ribbon aboard RMF Echo, owned by Rushy Marsh Farm, LLC, after they completed the jump-off in 34.687 seconds.

While several riders made it to the second round, only a few combinations were able to go double-clear. Lambre gave credit to his horse for the win, Mick Jagger, who is a newer mount. “He arrived just back in July from Mexico, and this is only his second Grand Prix with me. He’s a very good horse, very scope-y. I hope he’s going to be a good one for me this winter season.”

Although rain caused the Grand Prix to move into the Covered Arena, Lambre actually commented that he preferred that for the competition. “Mick Jagger jumped inside [the indoor arena] a few weeks ago, so for me it wasn’t an issue. I like the indoor because I can turn faster, especially with this horse. Sometimes when they’re out on the grass field they get too open and you can’t be as quick with the turns.”