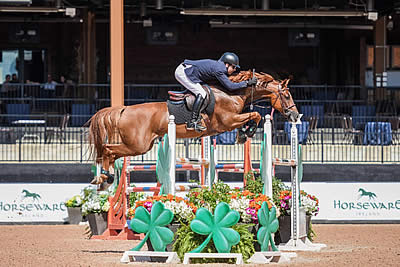 Course designer Nick Granat (Chicago, IL) had 12 horse-and-rider pairs in the initial round and welcomed back four entries in the jump-off. Although Lambre and the 2010 Oldenburg gelding (Conthargos x Balou Du Rouet) owned by Salvador Onate Barron came out in the lead after their final round, Con Rouet has been getting a break from jumping “as much” while Lambre competed at Saugerties, NY.

“Although this is his first week [back] now, Con Rouet is a super careful horse and very competitive,” Lambre explained. “The first round was not easy, especially for a national welcome, and I was not super-fast [in the jump-off] since there were only four, but it ended up being a good risk since the last rider [Grant Seger] was faster but had the last rail down.”

Con Rouet did not compete in Fall 2 competition following his win, but Lambre did return to Tryon Stadium for a win aboard Diathago in Saturday’s $25,000 Carolina Arena Equipment Grand Prix. “I’m preparing Con Rouet for Wellington to have him ready to do the speed classes there. I think his level is gonna be 1.45m, but that’s okay because if he’s fast it’s good. He’s going to be a really competitive horse,” Lambre concluded.

Moylan shared that String of Pearls, who is owned by his wife’s mother, has been a member of his program for about five years and has been very successful. “I found her [String of Pearls] in Germany as a four-year-old and immediately she suited my wife’s mother, Penny Denegre, who has had horses with me for a long time and is a great supporter of this sport. She’s just been a winner since we’ve had her.”

Although Moylan enjoys showing the mare himself, he explained that “it’s really about Penny this year,” and that his main goal for String of Pearls is simply to prepare her to compete at the upcoming indoor shows. “Penny qualified for Harrisburg and Washington [International Horse Show], which is a big deal in the adults and we’re very excited for her to go there.”