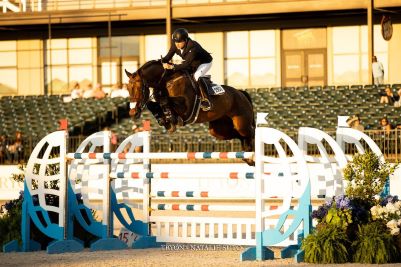 The Michel Vaillancourt (CAN) course design challenged 31 entries in the first round, with 13 horse-and-rider pairs returning for the jump off. Owner-rider Lambre and the 2007 Oldenburg stallion (Chacco-Blue x Cincaba Rouge) were just second in the order of go, taking an early tour of the course and producing the first clear round of the night. “It looked like it was a nice course,” Lambre reported. “There were 13 clears, but it was a good three-star, I think.”

Having earned the first stab at the second round, Lambre chose to be as fast as possible without knocking a rail in hopes that the dozen competitors behind him would not best his challenge. “The jump off was really nice, with some options to do fewer strides. I was the first to go, so I tried to be really fast and then in the end, it paid off.”

Lambre elaborated, “I made a plan; I did six strides between [fences] one and two. I think not so many did that. And turned tight to number three, and then took the risk for the last three jumps. And in the end, it was not so easy to get the first distance like I did.”

He reported that Chacco Blue II has been “very consistent” in the last year at the Grand Prix level. “I think this is the seventh Grand Prix that he’s been in the top three this year. So now, he will have a few weeks off and then we’re going to try to do some five stars next.”