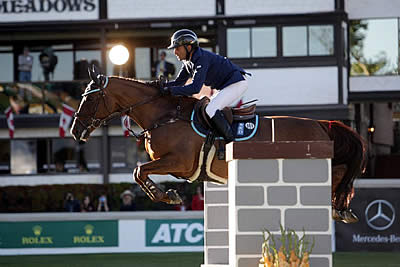 Calgary, AB – Friday night’s Mercedes-Benz Evening of the Horse at the Spruce Meadows ‘Masters’ Tournament CSIO5* featured an exciting line-up of international show jumping competition capped off by live music and a dazzling display of fireworks.

It was a packed house to watch many of the world’s best horses and riders compete in the evening’s events, which included the Friends of the Meadows Cup 1.60m with a win for Egypt’s Sameh el Dahan and WKD Diva, as well as the always-exciting ATCO Six Bar competition with a victory for hometown favorite Chris Surbey (CAN) riding Arezzo.

The ‘Masters’ Tournament runs September 7-11, 2016, featuring the best horses and riders in the world competing at Spruce Meadows. Highlights include the BMO Nations’ Cup on Saturday, with teams from around the world competing for top honors; and Sunday’s CP International Grand Prix, presented by Rolex, with a staggering $2 million in prize money up for grabs in this year’s competition.

Venezuela’s Leopoldo Palacios set a challenging track for the 30 starters in Friday’s Friends of the Meadows 1.60m competition. Only five entries were able to clear the first round course without fault to advance to the jump-off, where the short course yielded just two double clears.

Spain’s Sergio Alvarez Moya and G&C Quitador Rochelais, owned by Gustavo Mirabal and AM Horses SL, were the first pair to qualify for the jump-off and return over the short course. The pair tipped a block off the wall to incur four faults and finish fourth with their time of 48.93 seconds. Sameh el Dahan and Joanne Sloan Allen’s WKD Diva were next to go and cleared the course in the winning time of 47.90 seconds.

Italy’s Lorenzo de Luca and Stephex Stables’ Ensor de Litrange LXII followed, dropping one rail jumping out of the vertical-to-oxer double combination, and finishing their round in 48.45 seconds for a third place finish overall. For the third day in a row, The Netherlands’ Frank Schuttert landed in second place, this time riding Syed Omar Almohdzar’s Apart to a clear jump-off round in a steady 56.26 seconds. Last to go, Denmark’s Nikolaj Hein Ruus guided Gerardo Pasquel’s Big Red to fifth place honors with two fences down, the first and the last on course, in a time of 51.72 seconds.

El Dahan got WKD Diva, a nine-year-old Dutch Warmblood mare (Balourado x Hors La Loi II), three years ago when she was six years old. He has built a great partnership with the feisty chestnut and declared that, as her names implies, the mare can be a “wicked diva.”

Describing Diva’s energy, el Dahan stated, “She impresses me every time she goes into the ring. She gives everything for me in the arena. She uses her energy in a good way, so it makes it a bit easier.”

The course was a challenging one on Friday, with many riders faulting at the final fence on track, and el Dahan was proud of his young mare for clearing it.

“I was 20th to go and by that stage there was only one clear round,” el Dahan detailed. “It was very difficult for everybody. That last jump was very wide. You have a big, tall vertical before it, so the horses jump too careful. They need a little bit of scope to jump that oxer and I was lucky. The mare has plenty of scope and lots of ability, so I encouraged her a little bit on the back rail, and she jumped beautifully. I’m lucky to be sitting on such a good horse.”

After completing a clear round in the jump-off, the rider described his initial feeling as relief, noting, “You look for a win for a long time. That was a good jump-off, and I thought it was quick enough, but there is always somebody that can be faster. You always have to wait until the last one in the ring and that sigh of relief comes if you are still in the lead.”

Friday’s win was one of the biggest in el Dahan’s career, and he remarked on the feeling of achieving that victory at the esteemed ‘Masters’ Tournament, stating, “That was one of my biggest wins and it is always a privilege to be at Spruce Meadows. The ‘Masters’ is such a big event and people watch it around the world. Being in the winner’s circle is a privilege. I am very lucky to be here.”

Surbey Checks a ‘Masters’ Win off His Bucket List

Friday night at the ‘Masters’ featured the ATCO Six Bar competition in front of a fantastic crowd in the International Ring at Spruce Meadows. Twelve entries started in round one where the fences climbed to a final height of 1.60m. Eleven continued on to round two where the final height went up to 1.75m. Seven combinations advanced to the third round with the final fence set at 1.85m, where only two were able to clear the obstacles without fault. In the fourth and final round, the height went up to a towering 1.90m with only two left to go.

From twelve entries down to two, Canada’s Chris Surbey jumped clear at the 1.90m-height aboard Spruce Meadows’ own Arezzo to take a hometown victory. Robert Smith (GBR) and his own Ilton brought down two fences to settle for second place. Knocked out in round three, Richard Spooner (USA) and Chivas Z, Sergio Alvarez Moya (ESP) and Arrayan, and Pedro Veniss (BRA) aboard Rissoa d’Ag Bois Margot all tied for third place.

Commenting on his victory, Surbey declared, “It is unbelievable. It is bucket list material to win a class at the ‘Masters’. It feels amazing.”

“As far as I know he has not done anything like this before,” Surbey detailed. “Kelly rode the horse for most of the season and I just took him over in June. We have just been progressively building our partnership. He had some good competitions here at the Summer Series. Then he came with me on a European tour and stepped up to jump some grand prix competitions. He is starting to gain a lot more experience, which I think helped him tonight under the lights.”

The atmosphere was electric in the International Ring Friday night as a packed house of fans cheered the riders on.

“It was amazing. We had a super crowd,” Surbey noted. “They get a lot of people in the same area right along the fence line to watch, so it is very special. I definitely felt them cheering me on.”

Though Surbey acknowledged that he has never jumped a fence of that size before, he felt like Arezzo could have jumped even bigger, and had confidence in his mount.

“He is super brave. He just got better as we went,” Surbey stated. “I tried to keep everything fairly consistent and I think he jumped it pretty easy. I think he found that the distance was getting quite short, so he drifted a little bit to the side to try to make himself more room, but I thought he jumped really well. He has lots of power and scope, so the height was not a problem.”

The ‘Masters’ Tournament continues on Saturday featuring the Suncor Winning Round 1.50m, followed by the BMO Nations’ Cup, with teams from 10 different countries competing. For a complete tournament schedule and full results, please visit www.sprucemeadows.com.