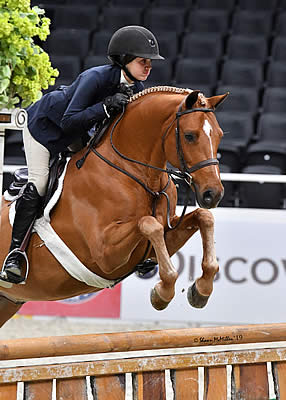 The final winners of the 61st annual Washington International Horse Show (WIHS) were named on Sunday, October 27, at Capital One Arena in downtown Washington, D.C., marking the conclusion of the six-day horse show.

Takacs, 14, of Oldwick, NJ, and Brighton, owned by Ellie Sadrian, won the under saddle and earned a first and second over fences in the Large Pony Hunter division to clinch the division championship and the Pegasus Stable Perpetual Trophy, donated by Ms. Fenwick Kollock, on their way to the grand championship title.

“It feels so good!” said Takacs of her major victory. “I can’t even describe how happy I am feeling right now. It’s such an honor at this amazing horse show.”

Takacs topped the WIHS Pony Equitation Finals last year riding Storyteller, and this year, she got the ride on Brighton from her good friend and fellow rider, Sadrian.

Hallie Moss watched Sam Walker win the Lindsay Maxwell Charitable Fund WIHS Equitation Finals on Saturday evening at WIHS and carried her inspiration from that into her performance in the WIHS Pony Equitation Finals to take the blue.

Moss, 11, scored an 84.5 in the over fences phase of the class to stand in third before the flat phase, after which the judges, Sue Ashe and Timmy Kees, put her on top as the winner with Birtley’s Crowned Jewel. It was Moss’s first time showing in the WIHS Pony Equitation Finals, though she showed in the pony hunter divisions last year.

“It’s my last show on ‘Teddy,’ so it’s pretty incredible,” Moss said. “I wasn’t slow, which I’ve been working on, and I was able to find the jumps out of stride.” Teddy is a 12-year-old Welsh Pony by Eyarth Tayma and owned by Three Ships LLC.