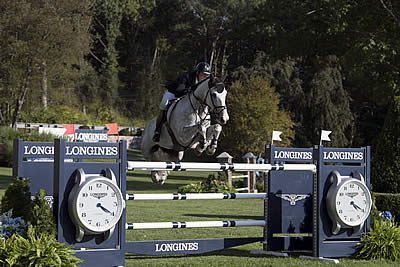 Devin Ryan entered the jump-off for the Longines FEI World Cup™ Jumping New York with an eight-year-old rookie and left with a World Cup qualifier Champion.

Devin Ryan (USA) and LL Show Jumper’s Eddie Blue topped a five horse jump off at Old Salem Farm (NY) to claim the blue ribbon and the first World Cup qualifier victory of their respective careers. They did so by defeating reigning World Cup Final Champion McLain Ward (USA) and new mount HH Callas, the only other pair to put forth a double clear performance on the day. Jack Towell (USA) and Lucifer V finished third.

“I knew going into it that I had a great horse, and I knew that there was a great field out there. I was the least experienced of the jump-off riders out there, and I’ve been watching them all year. I went out there and rode my plan.” — Devin Ryan (USA)

Ryan began the North American League at Bromont aboard the 10-year-old Cooper, but he saw New York as the ideal place to test his younger mount in tougher waters, a decision for which he was rewarded. Eddie Blue excelled over the testing track set by course designer Alan Wade (IRL); less than 13 percent of the 39 competitors advanced to the shortened course.

“I’ve slowly brought him along throughout the season and used him as second horse in ranking classes,” Ryan explained. “I built him up, and he’s been going so strong. A field like this suits him with his brig stride and big scope, and it gives us time to organize. The field fits the horse, and I thought it was a great place to step up and see what he brought.”