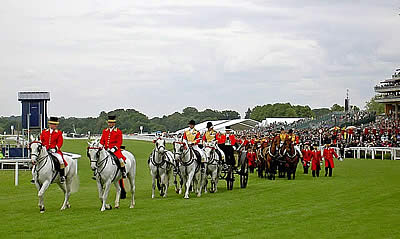 The five-day British Royal Ascot horse racing festival, due to start on June 16, attracts over 300,000 spectators. As you may have seen, the British Horseracing Authority (BHA) announced on March 17th that racing will be suspended until the end of April due to the national coronavirus crisis.  At this stage we ask for everyone’s patience with regards to updates relating to Royal Ascot.

The shutting down of racing until the end of April by the BHA places a considerable degree of uncertainty on some of Britain’s biggest Flat meetings, for example the June jewels of Royal Ascot and the Epsom Derby.  But know that you have come to the right place for the latest info in the Ascot betting guide. Go to this guide to understand the types of betting available to you, e.g., win, place bets, each-way bets, and futures. Futures bets can be place in advance of the race months, weeks, or days ahead of a race with fixed and generous odds.

Make your predictions for the finishers to get the trifecta, one of the most popular Royal Ascot bets.  Even more type of bets and tips are available, so be sure to study this guide before the race in June. As the race date gets near, there will be even more types and offers of betting. On top of that, you can watch the race online here.

The Royal Ascot race stretches over five days, with six races each day. The Ascot Racecourse located in Ascot, Berkshire, England is one of the leading racecourses in the United Kingdom, hosting 13 of Britain’s 36 annual Group 1 horse races.  The Royal Ascot is the centerpiece of Ascot’s year and it dates back to 1911 when the week of races in the third week of June became a Royal Week.

Every year Royal Ascot is attended by Elizabeth II and other members of the British Royal Family such as The Prince of Wales, arriving each day in a horse-drawn carriage with the Royal procession taking place at the start of each race day and the raising of the Royal Standard and the playing of the National Anthem. The Duke and Duchess of Cambridge also attend, as well as the Earl and Countess of Wessex, and other Royals.

What to wear in the Royal Enclosure if the race is still on in June?  The Royal Enclosure is synonymous with sartorial elegance. This is upheld by a formal Dress Code, which guests are invited to embrace with their own individual style and thus contribute to an occasion heralded internationally as a major fashion event.

What will your day be like at Royal Ascot? Gates open at 10:30am with the Royal Ascot Greencoats greeting you at the gate. At 2pm each day, the Royal Procession begins with the Royal Landaus or carriages approaching down the famous Straight Mile.  It is a short but spectacular jaunt that has happened since 1825 which signals the start of the Royal Meeting event.

After the Royal Procession passes throughout the parade ring, the first race begins at 2:30.  The last of the 6 Flat races is at 5:35pm.

At 6pm, there is singing around the bandstand to the Royal Welsh Guards choir for songs old and new.  The day draws to a close at 8pm in the Royal, Queen Anne, and Windsor Enclosures, but on Thursday, Friday, and Saturday, the Village Enclosure continues its party until 9pm.