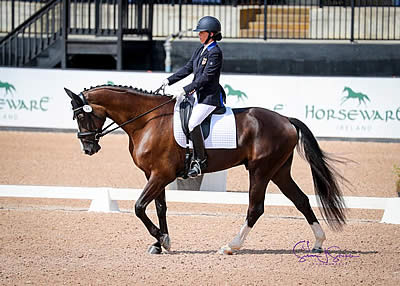 “It feels really good [to win a National Championship], Trunnell shared. “I haven’t been with Dolton for very long. [Our] partnership is really forming.” Trunnell also relayed that one of the highlights of her tests with Dolton was “just how consistent he was. Always marching!”

Trunnell scored a 79.333% in the FEI CPEDI 3* Freestyle Grade I, earning the highest score of the weekend with the 2012 Hanoverian gelding (Danone I x Unknown) owned by Flintwood Farm LLC. “Our Freestyle music is from ‘Forrest Gump’ – it’s adorable!”

While Trunnell is hoping to be named to Team USA for the Tokyo Paralympics, she reflected that accuracy is a big focus, and that gaining experience at TIEC is a great environment to prepare for atmosphere and stiff competition going forward. “[Going forward we’ll do] just a lot of training, and working on accuracy with geometry. I think the bigger venue and more competition is more realistic of what we’ll get [in Tokyo], so it helps us mentally.”

Botana shared that his weekend with the 2001 Trakehner stallion (Unkenruf x Lida x Enrico Caruso) owned by Margaret L. Stevens, Lord Locksley, had been an “amazing” culmination of hard work over the summer: “We’ve worked all summer and learned a lot. We practiced the halt, bending, and improving precision, plus overall harmony. I think it all really came together this weekend. I think we were able to pull off some really improved balance in our turns, and stayed constant throughout the weekend with high scores. It’s been amazing; everything kind of came together, from working with my trainer and meeting to go over our test before each ride, and taking the judges’ comments and what I felt during each ride to transition on to the next test. [That 75] was amazing. We had a perfect ride, and it all came together.”

Botana and the big grey stallion have made strides towards harmony and Lord Locksley knows his job well despite a serious career change, Botana explained. “It’s a big transition from being a Grand Prix International stallion to being in Para Dressage Grade I, and he’s taken beautifully to it. It took us a while to get into a groove,” Botana recalled, “but now we’re in a perfect balance. He knows that as soon as I put my foot in the stirrup, we’re going to walk, and that’s it. There can be a million things going on, and he won’t bat an eye. But the second I get off and step a foot away, he’ll be back to his regular big stallion self!”

Bateson Chandler and the 2005 Dutch Warmblood gelding (Cantango x Polina x Ferro) owned by Jane Forbes Clark repeated their Friday win in the FEI Grand Prix CDI 3* with the top score in Sunday’s FEI Grand Prix Special CDI 3*, but Alcazar was “a bit more with me today,” she explained. “I’m a little happier with this ride, because he’s another two days down the road of being in the heat, and sort of it’s been a little tough for him. He came off a lot of atmosphere in Europe, so now he’s a little like, ‘what happened to everybody?’ This has been an amazing show and he felt a bit more with me today.”

The pair has had a busy summer and Alcazar is ready for a break, Bateson Chandler relayed, but spent their last competition before a holiday making the most of their stay. “It’s an amazing venue. This is truly a world-class venue with beautiful stabling, which always really matters to us. We’ve got fans in the stalls, which really helps with the heat.”

Karen Lipp and Whitney travelled down centerline to win the blue rosette in Saturday’s Grand Prix Freestyle CDI 3* with a score of 61.185%. Lipp shared that she has been working with Whitney, a 2005 Hanoverian mare (White Star x Hauptstutbuch Grace) owned by Kathleen Oldford, since she was four years old and has brought her through all of the young horse programs: “We did the four, five, and six-year-old programs. Her owner rode her a little bit and then decided to sell her, and then she didn’t like that idea, so she said, ‘You keep her and ride her.’ I’ve been showing her in the Grand Prix now for about two and a half years.

“I didn’t really have a quality horse to show in CDI for a year, so it’s been nice to have Whitney go the CDI ring because it was a long break for me out of the ring, and it’s a lot different than riding in normal shows.”