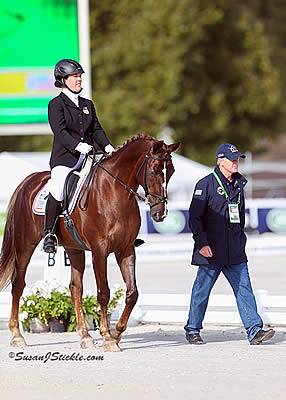 The William E. Simon Olympic Endowment for the Support of Athletes was established in 1998 by Mr. William E. Simon, Sr., former U.S. Olympic Committee President and U.S. Secretary of the Treasury. Grants for training and competition are awarded to athletes showing financial need. By creating this fund, Mr. Simon recognized the importance and many personal benefits of participating in sports. Awards are made once a year.

Roxanne Trunnell began her Dressage journey as an athlete when she first started her own business as a teenager to finance the purchase of her dream Warmblood horse. That dream came true in 2003 when she purchased Nice Touch (Touché). With a top-notch horse and a full riding schedule, Trunnell began making her way through the able-bodied Dressage ranks, earning her Bronze medal along the way. On October 31, 2009, life as she knew it changed forever when Trunnell awoke that evening unable to stand up without falling over. After a series of events and the best medical specialists around, the official diagnoses was inconclusive. In 2013, Trunnell got back in the saddle and started competing as a Para-Dressage rider. In less than a year she went from developing rider to internationally ranked para-dressage athlete. In 2014, Roxanne Trunnell was named to the 2014 Alltech FEI World Equestrian Games U.S. Para-Dressage Team. Trunnell competed with her own horse Nice Touch during the Normandy, France Games. As a high-performance international Para-Dressage rider Trunnell is aiming for a spot on the U.S. Paralympic Equestrian Team at the 2016 Rio Paralympics.