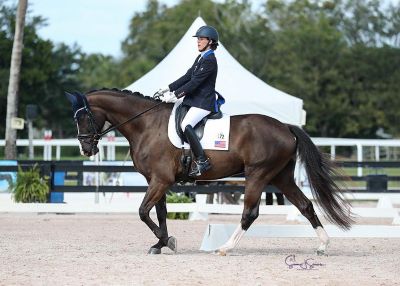 On Friday, spectators were treated to the return of United States Paralympic Gold Medalist, Roxanne Trunnell, and her Paralympic mount Dolton, owned by Flintwoode Farms LLC and Karin Flint, to the show ring for the first time since their golden performance in Tokyo. They executed a beautiful test in the Para Equestrian Team TOC, and followed that up on Saturday with an equally splendid test in the Para Equestrian Individual TOC class, to come away with wins in both.

“Dolton felt outstanding. He always is so relaxed on the Global show grounds that he gives me the feeling he really is enjoying what he does, and how the horse feels about his job is always a top priority for me,” commented Trunnell. “I think the best part of my tests were the serpentines. Dolton is such a big horse that the serpentine really allows him to swing through his body and bend, plus he gets to really show off that drool-worthy, sexy walk of his.”

Friday’s FEI Prix St. Georges class was won by Julie McKean (USA) with Fling For U, a 13-year-old Swedish Warmblood mare by Blue Hors Don Romantic x OO Seven, with a score of 73.823%. They garnered praise for their lateral work, notching scores of eight on both the half-pass to the left and to the right and were able to just edge out Vanessa Creech-Terauds (CAN) and Daniel L who scored 73.529%.

In Saturday’s FEI Prix St. Georges class, there were 11 competitors in the open section where Christopher Hickey (USA) rode to the win with 72.794% aboard Valentin, a 10-year-old Swedish Warmblood gelding by Dalwhinnie x Regazzoni. Their consistent marks across the test propelled them to the top spot, just ahead of Adrienne Lyle (USA) and Nexolia Feodoro, who scored 72.353%.

Seven riders contested the open section of the FEI Grand Prix class, but it was Eliane Cordia van Reesema (USA) who excelled from start to finish with Codiak. Codiak, a 13-year-old Rheinlander gelding by Cristallo 7 x Carabas, demonstrated exceptional passage and pirouettes for marks of eight, which boosted his score with Cordia van Reesema to a 74.239%. Second place went to Lisa Marriott (GBR) and Valucio DH Z, who finished with 69.347%.

Competition concluded on Sunday with another notable display from 2020 Olympic team silver medalist Adrienne Lyle who rode Fürst Dream, a stallion by Fürstenball OLD owned by Betsy Juliano LLC, to a remarkable score of 96.000% in the USEF Young Horse Test for 4 Year Old class. Judges Sandy Osborn (USA) and Kem Barbosa were impressed with the trot and canter rhythm reflecting suppleness and natural balance.