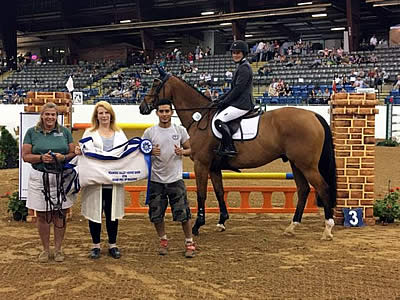 Lexington, Va. – June 28, 2016 – An impressive crowd of over 1,000 spectators turned out Saturday night to see Virginian Brooke Kemper and her own Classified, a 12-year-old Holsteiner Thoroughbred gelding, take home the win in the $25,000 Grand Prix of Roanoke. The evening class was the highlight of the show that this year found a new home at the Virginia Horse Center.

Kemper bested a field of 11 in the Grand Prix, emerging victorious after a four-horse jump off. Maryann Charles and FVF Sailor Man, a 10-year-old Dutch Warmblood gelding owned by Fox View Farm, were last to go in the jump off and brought home second place. The third place spot went to Tyler Smith and his own Soho D’ermisserie, a 10-year-old Selle Francais gelding.

Kemper was happy with her ride and praised the Mark Donovan designed course.  “The first course really rode a lot like it walked,” Kemper said. “It was pretty straightforward so that was nice. The time allowed was generous so we got to take our time and stick to the plan and that worked out well. I came back second in the jump off and had a fast horse behind me so I had to try to be as quick as I could and still leave all the jumps up.”

Saturday night also saw Saddlebred championships in the Coliseum. Smith Lilly took home first place in the Five-Gaited stake class aboard Blackout, owned by Ceil and Kenny Wheeler. On Friday night it was Catherine Wheeler who took home the top prize in the Five-Gaited Junior Exhibitor Championship with He’s Born to Royalty. Aimee Harrell and her own Shokoe Slip were the champions in the Show Pleasure Driving.

The Roanoke Valley Horse Show is a nonprofit organization and event, and the funds raised from the annual horse show are donated to health and human service organizations in the region. Though the horse show moved outside of the area, the event will continue to benefit the Roanoke Valley and to uphold the show’s longstanding traditions of southern hospitality.

In the $5,000 Chatham Hall USHJA National Hunter Derby it was Jason Berry and Attila, an 11-year-old Dutch Warmblood gelding owned by Ernest and Betty Oare, who brought home the top prize. Berry was thrilled with his ride and was full of praise for Attila. “I came back third or fourth,” Berry said. “I knew I had to be as handy as I could be. We made every inside turn and galloped everywhere we could. He was phenomenal. He had a 90 plus four bonus points. He rides great, he’s game for anything, he’ll turn, he’ll jump big – he’s a great horse.”

The show’s new location was by all accounts a success, and some rainy weather during the week was well handled by the facility. “The Virginia Horse Center could accommodate the bad weather we had all week,” said Kemper. “They were able to move everything indoors because of the rain, and when we did move back outside, the footing was great and it was safe.”

Berry echoed these sentiments, saying, “I loved the old show grounds just because it was in Roanoke. But we had terrible thunderstorms one day, so it was definitely nice to be at the Virginia Horse Center where they had indoor rings we could move everything to and still get all our classes in. At any other horse show we would have had to cancel. And even after torrential downpours, the footing in the outdoor rings was excellent.”

The exhibitor and spectator turnout exceeded expectations for this first year at the Virginia Horse Center. Kemper was enthusiastic about the new location of the show and the opportunity to interact with riders from other breeds and disciplines. “I’ve been to the Roanoke Valley Horse Show many times,” Kemper said. “I’m glad to see that they found a new home at the Virginia Horse Center – it was great. It’s a lot of fun to go; we don’t get to do many shows with other disciplines, so it’s a lot of fun to see the other breeds there and see them participating and get a little more interaction in the horse world.”