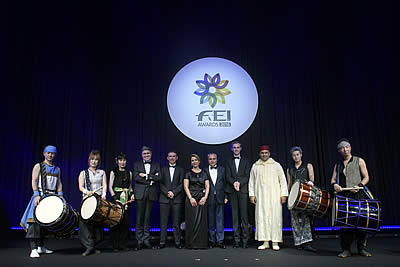 Tokyo (JPN), 22 November 2016 – Rio 2016 Olympic Jumping champion Nick Skelton (GBR) added another major accolade to his collection when he was declared the winner of the top prize at the prestigious 2016 FEI Awards gala dinner in Tokyo (JPN), in the presence of guest of honour, FEI Honorary President, HRH Princess Haya.

Nick Skelton won the coveted FEI Best Athlete honour at the “Oscars of the equestrian world” presented in association with the FEI’s top partner Longines, at the Park Tower Hotel. The FEI Awards celebrate the excellence, commitment, dedication and courage of those in equestrian sport, and the glittering ceremony also saw Nick’s groom Mark Beever (GBR) declared winner of the FEI Best Groom award.

In recognition of outstanding efforts in what has been another exceptional sporting year, the ceremony kick-started with the presentation of the Longines Rising Star award going to Sönke Rothenberger (GER), an award honouring the pursuit of excellence and rising talent for a person aged 14 to 21. Along with his FEI award, Sönke Rothenberger was also presented with a Longines Conquest Classic watch.

Brazil’s Rodolpho Riskalla took home the Against All Odds award, while the FEI Solidarity award went to the Morocco National Federation/SA Charif Moulay Abdellah Alaoui, President of the Royal Moroccan Federation for Equestrian Sports.  This award was accepted on behalf of the Federation by the Moroccan Secretary General, Badr Fakir.

“The FEI Awards are an opportunity to celebrate the outstanding work of those who deserve the recognition, not just of our community but of the wider sports industry, and we’ve had five fantastic award winners tonight,” FEI President Ingmar De Vos said. “These talented and dedicated athletes and individuals constantly inspire future generations of athletes, and not just equestrian athletes, and can literally change lives and communities. The FEI is very proud to honour and acknowledge these achievements.”

Longines’ Vice President and Head of International Marketing Juan-Carlos Capelli, who presented the Longines Rising Star award during the ceremony, said: “It is my great pleasure to be here this evening and to be a part of the FEI Awards’ celebration of these great equestrian heroes. As we have seen here tonight, all of the winners have shown what hard work and dedication are all about. They are champions that we can be very proud of.

“On behalf of Longines, I extend my warmest congratulations to tonight’s winners, and in particular our Longines Rising Star, Sönke Rothenberger. It’s very exciting to see all these incredible people pursue their dreams and continue to be great ambassadors for their sport.”

The evening’s celebrations had opened with a presentation made by Juan-Carlos Capelli to the FEI President Ingmar De Vos of a limited series timepiece from the Longines equestrian collection, the Longines Equestrian Pocket Watch Horses Trio 1911. This special presentation was made on behalf of the Swiss watchmaker to celebrate their 105-year commitment to the discipline of Jumping. The exclusive 18 carat rose gold timepiece will be permanently showcased in the state-of-the-art interactive gallery at FEI Headquarters in Lausanne (SUI).

Find out more about the five FEI Award winners below:

“To receive this award is a great honour for me,” he said. “There are so many other people who would deserve this, but to be the one who receives it – well it’s just amazing and the icing on the cake for everything we have experienced this year. I am really surprised and thankful and never expected that the FEI would honour me with this prize. Thank you again very much.”

Individual Olympic Jumping gold medallist at Rio 2016 with the great horse Big Star, Nick Skelton began riding at the age of 18 months. In 1975 he took team silver and individual gold at the FEI European Jumping Championships for Juniors. At senior European level, he has won three gold, three silver and three bronze medals with the British team over a 26-year time period. In 1980 he competed in the Alternative Olympics in Rotterdam (NED) where he was a member of the British silver medal team. At the age of 54, Skelton was part of Britain’s gold medal team at the London 2012 Olympic Games and finally claimed individual gold in Rio, at his seventh Olympic Games.

Skelton broke his neck in September 2000 which could have ended his career, but after retiring in 2001 he recovered and began competing again in 2002. He has also had a hip replacement and two knee operations.

Nick Skelton’s loyal groom Mark Beever received multiple nominations (the most in this category) from other grooms, riders and the larger equestrian community. His loyalty and dedication to his boss is clearly evident as he’s worked for him for 31 years! Beever has groomed at numerous Championships and Olympic Games, and knows how to keep both horse and rider relaxed. His skill, knowledge and incredible work ethic means his horses always look outstanding, and he was instrumental in ensuring Big Star was fit and in prime condition for the Olympic Games in Rio. Beever is very well respected by his peers and his dedication to Big Star is beyond question, as he caters to his every need, ensuring the horse is happy and settled down before he looks after himself. Most importantly, Skelton has full confidence in Beever’s ability to care for his horses.

“I would just like to say thanks to everybody that voted for me,” he said. “It’s not just all about me. It’s a big team, a lot of hard work, but it all paid off in the end. Thank you to everybody and the FEI for doing this for me.”

The Moroccan Equestrian Federation were popular nominees in this category and even received full endorsement from the FEI Solidarity team at FEI Headquarters complimenting them on their proactive stance on development and their successes in 2016. They represent a concrete example of development in equestrian sport with all the necessary ingredients – development of the National Federation structures, Coach education, Athletes training, values, and particularly horse welfare. They have developed a state-of-the-art national training and competition centre – the Institut National du Cheval. They were hosts of the FEI World Jumping Challenge Final 2016, which was a tremendous success, and hailed as the best-ever Challenge Final, from both an organisational and sporting standpoint. This year they had their first-ever participation of a Moroccan athlete at the equestrian events of the Olympic Games when Abdelkebir Ouaddar competed at Rio 2016. The Federation has created solid foundations for the development of the sport and related employment in the sport in Morocco, as well as increasing awareness and promotion of the sport nationally and regionally. Education and knowledge transfer, and assistance to local breeders is also a priority.

“My Federation is very honoured to have received the FEI Solidarity award this evening,” Prince Moulay Abdellah Alaoui said. “Thank you very much; we are very touched and very humbled by the award we are receiving today.”

AGAINST ALL ODDS – Rodolpho Riskalla (BRA)

Multiple nominations were received for Rodolpho Riskalla, winner of the Against All Odds award. The 31-year-old competed for his home country of Brazil in Rio 2016, but in the Para-Equestrian Dressage events at the Paralympic Games and not in the Olympic Dressage events, which was his original plan. Riskalla contracted meningitis in 2015 which resulted in the loss of both his feet and most of his fingers. Nevertheless, barely out of hospital following life-saving amputations, he was back in the saddle with his sights set firmly on the Rio 2016 Paralympic Games, with less than a year to achieve his new goal! He had to learn how to ride again using prosthetic legs and few fingers, and his determination, passion, resilience and dedication have made him a national hero. Riskalla pursued his dream of representing his country at his home Games despite what life threw at him and had to work tremendously hard to overcome adversity.

“To win the FEI Awards, it’s like the Oscars; it’s like being a superstar,” he said. “But also, to win Against All Odds represents exactly what happened to me this last year. Before this I never believed a human being could be so strong and adapt so quickly; it’s something that’s come from inside; it’s like the Olympic spirit. It’s something that is inside you and I am really proud to be a para dressage rider, a Paralympian and to be a representative of our discipline.”