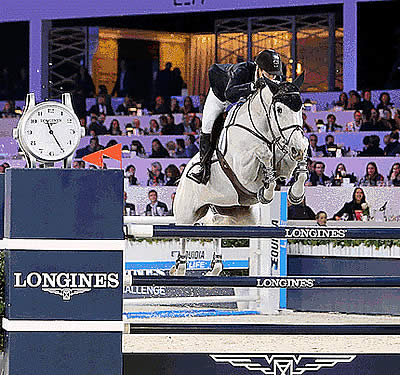 The global rivalry is heating up again as the Chefs d’Equipe from Team USA and Team Europe officially submitted their long lists this week. Team Europe, triumphant in Paris in December, will look to sweep as Philippe Guerdat, the gold medal coach from the 2016 Rio Olympics, plans to bring over a roster of top talent to defend the title. Ridland, the American legend whose underdog team nearly shocked the European squad in front of a packed French crowd, is hoping that on home soil, with some lineup changes and strategic learnings, his roster of stars will reign victorious when the Riders Masters Cup, created by EEM and presented by EEF and Founding Partner Longines, comes to New York April 28, 2018.

Who better to lead Team USA into battle at the Riders Masters Cup in New York than hometown heroes and Olympic gold medalists McLain Ward and Beezie Madden?

Ward, who sits at No. 3 in the FEI Longines Show Jumping Standings, is most likely to lead the riders into battle with Madden (currently ranked #23) for Team USA as they take on some of Team Europe’s best show jumpers in an epic battle for the Riders Masters Cup.

With only 5 spots on each Team, which must include one under 25 rider, joining Ward and Madden as they battle for American glory will be two selections from veteran superstars Laura Kraut and Lauren Hough, or potential young guns Kristen Vanderveen, Andrew Ramsay, Jessica Springsteen, and Quentin Judge, who would bring lots of energy to the team competition.

Ridland and this more experienced squad, whatever the final makeup, are poised for vindication and ready to fly the flag high in what promises to be epic competition, action packed sport, and intense team rivalry keeping fans on the edge of their seats! This is an event not to be missed when the transatlantic battle continues and pins these two international showjumping super powers against one another in an epic battle of strategy and sport.

The final teams and the official draw for the order-of-go will be held on Thursday, April 26, 2018, during the press preview on opening day of the Longines Masters of New York!

Make sure to follow www.RidersMastersCup.com for updates and for the reveal of Team Europe in the days to come! Don’t forget to share the love for Riders Masters Cup and the team you support on social media with the hashtags #WaveYourFlag and #RidersMastersCup.