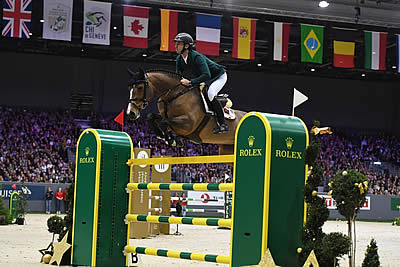 From 12-15 December 2019, show jumping fans will travel to Switzerland for what is widely regarded as the world’s greatest indoor competition, CHI Geneva. The event, which spans four days, marks the final Major of the year and will welcome the world’s best equestrian combinations. Each rider will compete in front of around 42,000 people at Palexpo, the biggest indoor jumping arena in the world, as they seek to gain show jumping’s highest honors.

Visitors attending the 2019 edition of CHI Geneva will witness world-class equestrian action at an event that has been voted the world’s best show jumping competition nine times. With several of the world’s most prolific horse-and-rider combinations set to compete, there will be numerous contenders vying to be crowned the next Rolex Grand Slam live contender, further adding to the hype of the highly anticipated event.

One of the favorites to claim this year’s title is legendary Swiss rider and World No. 1, Steve Guerdat. The Rolex Testimonee has built up a great run of form this season after winning the ‘Pan American’ Grand Prix presented by Rolex in Spruce Meadows this summer and finishing second in the 2019 Rolex Grand Prix at The Dutch Masters in March. Already a three-time winner of Rolex Grand Prix at CHI Geneva, Guerdat will be eager to impress once more in front of a vibrant home crowd.

American rider Kent Farrington sits just outside of the world’s top 10 but has already established himself as one of the best riders in the world after magnificently winning the 2019 Rolex Grand Prix of Aachen with his outstanding mare Gazelle. The Rolex Testimonee has been on fine form this season, making him a prime contender for the prestigious Rolex Grand Prix of Geneva title, which he previously claimed back in 2017.

Never far from success is Germany’s Daniel Deusser, who currently sits at third in the Jumping World Rankings. Given his recent form, including a second-place finish in the 2019 Rolex Grand Prix at CHIO Aachen back in July, Deusser is expected to be one of the top performers at this year’s event in Geneva.

Current World No. 2, Martin Fuchs, is another rider who will be looking to secure the Major win in his native Switzerland. The young rider has already achieved much success in his career, including a silver medal in the Individual Jumping at the 2018 FEI World Equestrian Games™, and is the current European Champion. Fuchs’ recent results have helped the 26-year-old establish himself as one of the world’s very best competitors, so there will be a high level of expectation for him to finish off the year with his first Rolex Grand Prix title.

A field of 40 combinations will battle it out in the hope of seizing the final Major victory of the year in the Rolex Grand Slam of Show Jumping at CHI Geneva, which promises to be a weekend of enormous competition starting on December 12th.