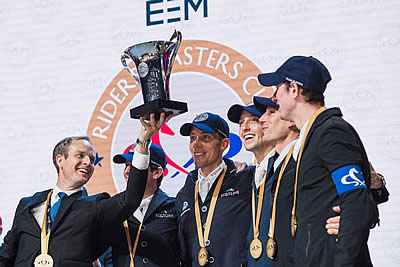 On paper, the Americas had serious chances to win the fifth Riders Masters Cup, flagship competition of the Longines Masters of Paris launched in 2017 by EEM with Longines for Founding Partner. Robert Ridland’s troops really seemed in a position to turn the tables on Europe and at last clinch the class that has been eluding them since the beginning. On paper only. Led by Swedish chef d’équipe Henrik Ankarcrona, Europe mercilessly won on a final score of 125 for the Old Continent to 80 for the New World.

The Americas dominated the first round
For the very first time, Robert Ridland’s team stood up to their opponents in the first round. It must be noted that for the sake of sport and suspense, the rules made it possible to select riders from all the Americas. The chef d’équipe could thus pick Canadians and Brazilians. Good choice: Ridland’s team included as many as 3 Olympic champions with the USA’s Laura Kraut, Brazil’s Rodrigo Pessoa, and Canada’s Eric Lamaze. Thanks to Kraut and Pessoa as well as Brazil’s Marlon Modolo Zanotelli, the Americas won three of their five duels. On Europe’s side, Olympic champions Kevin Staut (France) and Henrik von Eckermann (Sweden) both had four penalties. At that point, with a provisional score of 40 to Europe’s 35, Ridland’s five had reasons to hope for a win.

Second round: Europe regains control
Right from the beginning of the second round, Europe recovered some strength… and took advantage of a weakness of the Americans who had all changed rides. Clear in the first round, Modolo Zanotelli was now eliminated for two refusals. The young Canadian Kara Chad was equally unfortunate. Only the legend that is Rodrigo Pessoa managed to win his duel against Henrik von Eckermann. Spearheaded by a reigning European champion and reserve World champion Martin Fuchs in top form, Europe eventually won four of the five duels for a fifth victory in as many editions. First to go in both classes and double clear, Fuchs commented, in front of packed stands: “I’m feeling very well at the Longines Masters of Paris. I won the Grand Prix here five years ago and I hadn’t been back since.”

The Americans only have two days left to win competitions at the Longines Masters of Paris 2019. On top of their triumph in the Riders Masters Cup, the Europeans won most classes so far, leaving only the Masters One Hubside to Modolo Zanotelli. Yes, they can… can’t they?