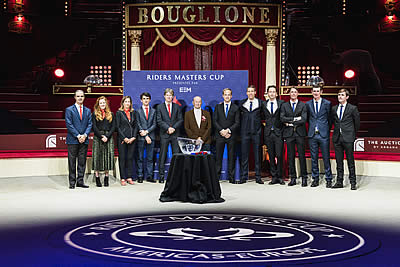 The first “signature” competition of the 11th Longines Masters of Paris, the Riders Masters Cup, will have two original teams of five European riders and five riders from the American continent battle it out on Friday December 6. The draw, which took place in the heart of Paris, at the Cirque d’Hiver, right before the young showjumping champions auction The Auction by Arqana, decided the duels for the first round of a competition which, so far, always smiled on the European side.

A spectacular and strategic competition, the Riders Masters Cup pits five riders from each team against each other in two rounds, or ten duels. The first round is held following timed Table A rules over a Grand Prix course. The starting order and the composition of the duels have been drawn. Each duel won in this first round earns the team 10 points. In the second round, held under Table C rules, the Chefs d’Équipes’ strategies and choices are crucial. In particular, they may, if they so wish, assign riders new mounts more suited to speed classes. The Chef d’Équipe of the losing team in the first set picks the first rider to start out; the leading team then has the advantage of choosing the competitor he wants to pitch against this first rider. The second, third, fourth, and fifth riders are then chosen alternately by the Chefs d’Équipe of the winning and losing teams. In the second set, each duel won earns 20 points.

The Riders Masters Cup will start at 9h00 pm on Friday December 6. The line-up of riders is entrusted to world renowned Chefs d’Equipe: Robert Ridland, team USA selector, for the Americas, and Henrik Ankarcrona, Sweden’s selector, for Europe. Each team will be supported by a showjumping legend: Marcel Rozier, French Team Olympic Champion in 1976 for the European side, and Nelson Pessoa, the great Brazilian champion who won countless competitions all over the World, for the Americas.