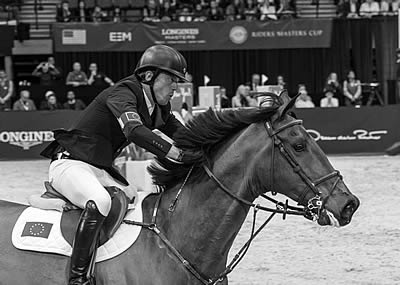 Team competition was at its finest in a transatlantic showdown between Riders USA and Riders Europe in the innovative $200,000 Riders Masters Cup, presented and created by EEM in collaboration with the European Equestrian Federation.  Show jumping fans were on the edge of their seats as the two teams faced off in a rematch that began at the Longines Masters of Paris back on December 2.  Riders USA chef d’Equipe Robert Ridland (USA) spent the past five months formulating his strategy for a win on home soil and sent out the best of the best to duel against Riders Europe, led by chef d’Equipe Philippe Guerdat (SUI).

In the opening duel, Kevin Staut (FRA) took the win over two-time Olympic team gold medalist McLain Ward (USA) when the American left an uncharacteristic two rails on the floor riding HH Gigi’s Girl.  Georgina Bloomberg then looked like she would emerge victorious with a quick clear aboard Manodie II H but was nipped in the end by Harrie Smolders (NED) to make it two to nothing in favor of Riders Europe.

Olivier Philippaerts (BEL) scored another point for Riders Europe when Adrienne Sternlicht (USA) struggled with her mount, Pembroke, for 12 faults.  Beezie Madden (USA) gave hope to American fans with a clear round aboard Con Taggio to score the first point for Riders USA after Gregory Wathelet (BEL) left a rail on the floor riding MJT Nevados S.  When the final competitor for Riders Europe, 2016 Olympic individual silver medalist Peder Fredricson (SWE), put a clear round on the board with H&M Zaloubet, Laura Kraut was unable to match his faultless performance with Hello Guv’Nor, leaving the opening match score at four to one in favor of Riders Europe.

As the saying goes, especially in show jumping sport, it isn’t over until it’s over.  Facing off in the speed match where double points were on the line, Riders USA had a chance to bring it back for the home crowd.  Ridland adjusted his strategy and sent Kraut back as the lead-off rider.  Riders USA’s confidence swelled when she came out victorious over Philippaerts riding Goofy van T Laerhof with a time of 61.20 versus the Belgian’s time of 61.83 seconds.  That put the score at four to three, with Riders USA quickly gaining on its opponents.

Staut was next in, posting a fast time of 57.43 riding Ayade de Septon et HDC that was soon eclipsed by Madden.  The newly-crowned Longines FEI World Cup Final champion brought in a fresh mount, Jiva, and raced to victory in a time of 57.02 seconds as the crowd went wild.  Suddenly Riders USA had pulled into the lead five to four.

New York City’s sweetheart Bloomberg laid it all on the line in the speed duel, leaving Wathelet in the dust with a brilliant ride.  Riders USA was staging a comeback of epic proportions, surging ahead seven to four.

The excitement continued to mount as Riders USA’s hopes looked bright, but Riders Europe were still breathing down its neck.  Sternlicht gave it her best shot with Pembroke, but when a rail fell Fredricson claimed two valuable points for Riders Europe, tightening the gap and making it seven to six in favor of the Americans.

It all came down to the final duel, which saw two of the fastest riders in the world pitted against each other.  Ward took no prisoners, guiding HH Gigi’s Girl home in a blistering fast time of 54.82 seconds.  Smolders had the weight of a continent riding on his shoulders, but the Dutchman never faltered, taking every risk to cross the timers in an unbelievable 52.91 seconds – by far the fastest time of the night – with Cas 2.  His perfectly calculated and executed performance gave Riders Europe the edge, putting the defending champions from Paris ahead by a nose to win eight to seven over Riders USA.

“It went right down to the wire!” exclaimed Guerdat of his team’s victory.  “We knew USA would be strong tonight because, as Robert said, after Paris they wanted to win back at home.  I have a team who are all champions and the best in the world at the moment.  It would be difficult to get a better team than this!”

Ridland was quick to promise that Riders USA will put up a strong fight the next time the two teams meet.

“It’s really exciting to see the top riders in the world going for speed,” concluded Ridland.  “It’s a great format, and I think everybody got their money’s worth tonight.  We’ll be back again!”

The show jumping stars of the future were put in the international spotlight Saturday night by EEM with the U25 Grand Prix, open to athletes aged 25 and under.  Founder and producer of the Longines Masters, EEM affirmed its commitment to propelling the next generation forward in their sporting careers.  It was an all-American podium finish, much to the delight of the home crowd, with Catherine Wachtell (USA) of Long Valley, NJ, snatching the win following a five-horse jump-off.  Coached by Todd Minikus (USA), who is competing in the Masters One division in New York, Wachtell, 23, earned the victory with a time of 34.96 seconds aboard Indy van de Roten, a 10-year-old Belgian Warmblood mare owned by Autumn View Farm.

Hot on her heels was 17-year-old Samantha Cohen (USA) and Carmen, her 11-year-old grey Dutch Warmblood mare.  With Olympic team gold Medalist Laura Kraut as her coach, Cohen gave it her best effort trying to catch Wachtell but fell short of the win when stopping the clock in 35.75 seconds to finish runner-up.  Taking third step on the podium was Samantha Wight, 20, who took a conservative approach, jumping clear in a time of 40.92 seconds aboard Edison.

“It’s a great division and I think it’s one of the most competitive because you have all the young talent and really amazing horses,” said Wachtell, a recent Georgetown University graduate who will be attending Fordham Law School in New York in the fall.  “It’s tough, but it’s really awesome to be a part of!”

Harrie Smolders Scorches to Victory in Masters One Kingsland 1.45m

The world’s best show jumping athletes were once again showcased at the Longines Masters of New York in the $60,000 Masters One Kingsland 1.45m on Saturday, April 28.  Dutchman Harrie Smolders (NED), who is poised to ascend to the number one position in the Longines World Rankings, topped a six-horse jump-off to take the win.  Riding the 13-year-old Holsteiner stallion Capital Colnardo for owner Copernicus Stables, Smolders took charge of the jump-off by blazing around the shortened jump-off track in a time of 33.12 seconds, overtaking the lead from Emanuele Gaudiano (ITA), who had stopped the clock in 34.05 seconds aboard the nine-year-old Oldenburg stallion, Chalou.  Edward Levy (FRA) took third position on the podium riding Rafale d’Hyverniere after posting a clear jump-off performance in a time of 34.84 seconds.

“It was quite a good class with only six clears,” said Smolders of the Masters One 1.45 competition presented by leading European apparel company, Kingsland.  “(Course designer) Louis Konickx did a good job; it was quite delicate.  It was not very big, but still tough in enough to jump.  The time was perfectly set.  In the jump-off, there were very fast ones straight away.  I saw Emanuele Guadiano and thought he had a good pace; into the double combination he could have gone maybe a little faster.  That is the only place he left a little gap, and that is where I tried to beat him.”

Of his appearance in the inaugural Longines Masters of New York, which joins Paris and Hong Kong in the series, Smolders noted, “It is always a high-standard event, very exclusive with high quality service.  We are always happy to come to the Longines Masters anywhere in the world!”

Requiring horsepower in its own right, the $20,000 Lamborghini Masters Power Six Bar saw the fences grow higher and higher as competitors fell by the wayside.  The last man standing was Devin Ryan (USA) and his 12-year-old Hanoverian mare, Florida, the only pair to successfully clear the final height of 1.80m and claim victory.

Hot off his impressive second-place finish in the recent 2018 Longines FEI World Cup Final in Paris, the Longines Masters of New York was Ryan’s first appearance back on American soil.  Hailing from nearby New Jersey, Ryan did not disappoint the home crowd, who willed the pair over each of the six fences on their way to the win.

“I decided I was going to do it for the spectators,” said Ryan, 36, of his decision to enter the Lamborghini Masters Power Six Bar with Florida, a horse he started riding last fall that goes by the nickname ‘Bambi’.  “She’s a really careful mare and it’s always good for a horse to go in a ring and do something a little different.  It was just like doing a gymnastic at home.  I don’t normally jump this high at home but if the horse can do it, it can do it.  She’s super easy to deal with, but when she puts her eye on a jump she turns into a spitfire and she lights up.”

Three riders tied for the runner-up spot after having a fence down in the final test.  Longines Ambassador of Elegance Jane Richards Philips (SUI) partnered with Calinesse de Guldenboom and two up-and-coming American female show jumping stars, Mavis Spencer (USA) aboard Dubai and Kristen Vanderveen (USA) riding Bastian 86, all tried their best, but only Ryan successfully left all the rails in the cups in a true demonstration of horse power.

Kicking off Saturday competition at the Longines Masters of New York, two-time Canadian Olympian Mario Deslauriers climbed to the top of the podium after claiming the Masters Two Trophy Mark Cross 1.40m. Deslauriers and Curo, a nine-year-old Oldenburg gelding were fastest in the one-round speed event to cross the timers clear in 57.11 seconds for the win.

“Curo is a blast to ride,” said Deslauriers, who competes for his home country of Canada, but now calls New York City home. “It was a nice change to bring him inside and show him the new fences, the crowd, and all the activity. He really grew up a lot this week.”

Deslauriers is at the Longines Masters of New York with his 18-year-old daughter Lucy, who is competing in the Masters One CSI5* division, saying, “Overall, the event is great and a nice new flavor. To have an indoor event with all the background performances, the boutique area, and this level of sport is a fresh look and I think we need more of that.”

Saturday’s highlight competition in the Masters Three division, the Oscar de la Renta 1.25m, was won by Jennifer Kocher (USA).  The win did not come easily as eight riders passed the first round test to advance to the jump-off over the course set by Louis Konickx of the Netherlands.  Four riders again jumped clear in the tie-breaker with Kocher posting the winning time of 36.02 seconds riding Elion V, a nine-year-old Dutch Warmblood stallion owned by her husband, Andrew Kocher (USA), who is contesting the Masters One division at the Longines Masters of New York.

Tori Corts (USA) finished second with a time 36.90 seconds riding the 14-year-old Chico Bello while Sweden was represented on the podium by Sophie Mörner, the only rider to qualify two horses, both owned by Lövsta Stuteri, for the jump-off.  It was her younger mount, the nine-year-old Dutch Warmblood gelding, Elliot, who stopped the clock in 38.46 for third place.