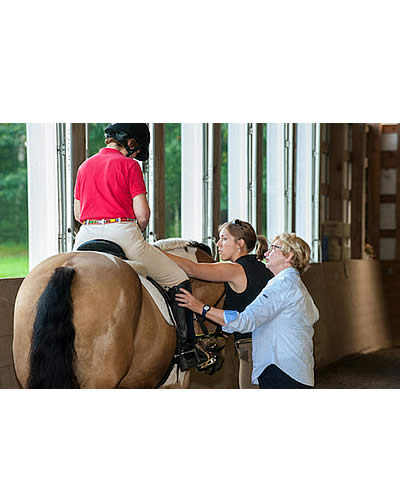 Hanneke Gerritsen from Holland works with a developing rider.

Carlisle Academy in Lyman, Maine, a Premier Accredited PATH Center and national leader in grassroots development for para-equestrian sports, has been the educational link for developing athletes and coaches. Experienced international para-equestrian clinicians, therapists, and coaches with their riders gathered for training and education primarily focused on para-dressage. Carlisle along with the United States Para-Equestrian Association (USPEA) and the United States Equestrian Federation (USEF) developed these hands on workshops that address areas such as: training tips, adaptive equipment needs and type of horses needed for high performance competition.

Hanneke Gerritsen and Clive Milkins each taught daily mounted lessons to both riders and coaches and offered their particular areas of expertise in several presentations including a musical freestyle primer, athlete development plan, and adaptive equipment information.   Additional workshops and lectures featured New FEI Classification Rules, Introduction to Para-Dressage Competition, Video Review of Para-Dressage Tests, and a Coaches’ Forum. Hope Hand of the USPEA shared information on the emerging para-equestrian disciplines as well as regional and national competitive opportunities within the U.S. The Unites States Equestrian Team Foundation also participated hosting the “Ride to Rio” Banquet Dinner, on Wednesday, Aug. 26, at the Nonantum Resort, where Bonnie Jenkins and Sara Ike of USET joined Keynote Speaker Tina Wentz in sharing the inspiration behind the Jonathan Wentz Memorial Challenge Fund.

Following the camp was the three day Para-Dressage clinic with Clive Milkins, Trainer-in-Residence at Carlisle Academy in Lyman, Maine. This was the first of many solo clinics in Maine that Milkins will be conducting. Carlisle Academy has recently completed the international work visa process so that Clive may be on site several months out of the year. He is also available for off-site clinics under the Academy’s sponsorship in 2016. Throughout these solo clinics, coaches of athletes are encouraged to attend in order to collaborate on training approaches and strategies for para-equestrians as well as use of adaptive equipment. Clive Milkins is a talented international para-dressage coach with 25 years of experience coaching para-equestrians as well as able-bodied riders in dressage and jumping. Milkins was the personal trainer of Sophie Christiansen, Great Britain’s triple gold medal winning rider at three Paralympics, and has coached several other para-equestrians competing at the international level.

Marci Bender, Equestrian Programs Manager The National Ability Center, attended the Camp as a Coach. She noted, “The Para Equestrian Pipeline Training Camp at the Carlisle Academy was a wonderful experience from start to finish. As a coach of a developing rider, I enjoyed the opportunity to network with other coaches and their riders, as well as gain valuable feedback on how to better prepare horses for my rider. Working with Hanneke and Clive was invaluable. They each bring a unique perspective to rider development and have a genuine interest in helping each person learn and grow. I appreciate the holistic approach of this camp, addressing needs of the rider not only on horseback, but also with comprehensive physical and occupational therapy assessments. Many thanks to the entire team at Carlisle Academy for facilitating a wonderful experience.”

Equestrians and coaches both developing and experienced took part in the clinic. 2014 World Equestrian Games athlete Annie Peavy used the opportunity to work with one of the best in the para-dressage world. She explained, “I had such a good experience at Carlisle Academy. The facility is so friendly and well run. I am glad I had the opportunity to be there and clinic with Clive Milkins. He offered valuable training tips, made me feel comfortable in asking questions, and helped me with my horse Ozzy Cooper.”

Clive Milkins is looking forward to additional clinics. He commented, “I am delighted to be taking on this new position at Carlisle Academy, where they integrate both equine therapy and sports. Para-equestrian sport has its roots in therapeutic riding, and I am thrilled to be involved in such an exciting new challenge. The future is bright.”

More about Clive Milkins:
Clive Milkins is a leading para-equestrian dressage coach from Great Britain. He began work with the RDA (Riding for the Disabled) in the late 1980s after volunteering at Moreton Hall Group while at Warwickshire College. Clive was the trainer for the British team at the 1990 World Championship and Games for disabled riders. He has since coached riders competing at Paralympic Games (Athens and Beijing), European Championships and World Championships. Clive coached triple gold medal winning rider, Sophie Christiansen, at the 2012 Paralympics. Clive has been nominated for numerous awards since his career began: Groom of the year, 2005; The Queen’s Award for Equestrianism, awarded for ‘Outstanding Services to Equestrianism’; and the Kuster BEF Groom of the Year in 2006. Milkins currently travels around the world working with both able-bodied equestrians and para-dressage riders.

More about Hanneke Gerritsen:
Hanneke Gerritsen, 5* Olympic Para-Dressage Judge and Olympic Technical Delegate, FEI Chair of the Compensating Aids Committee, Program Consultant for Carlisle Academy. Hanneke began her career with horses at her father’s farm while continuing a career as an interior designer. Now she spends all her time coaching, judging and performing a number of executive functions in the Para-Equestrian disciplines, including acting as FEI Chair of the Compensating Aids Committee. In addition to judging international qualifier competitions worldwide, Hanneke coached the Dutch Para-Equestrian Team from 2000 to 2004. From 2005 through 2010 she was a member of the ground jury at a number of international championships including the 2008 Paralympics in Hong Kong. She was the Technical Delegate at the 2010 World Equestrian Games in Kentucky. In addition to her Para-Equestrian pursuits, Hanneke is a Grand Prix judge and a selector and trainer for new dressage judges at all levels. She has bred several talented dressage horses and is a trainer and coach to several talented students in Holland. Hanneke gives clinics all over the world.

For additional information on Carlisle Academy or the educational camps and clinics, contact Sarah Armentrout at sarmentrout@carlisleacademymaine.com or by phone at 207-985-0374.

Ultimately the goal of the USPEA is to foster growth in the para-equestrian discipline. From growth in the number of participants to growth as a team, and growth in the experience and knowledge of all involved. From local horse shows to international Olympic Games, the USPEA will provide para-equestrians the knowledge of what they need to succeed. The USPEA connects with the International Olympic Committee (IOC), the Fédération Equestre Internationale (FEI), the United States Dressage Federation (USDF), and USEF which provides Para-Equestrians the top equestrian resources.