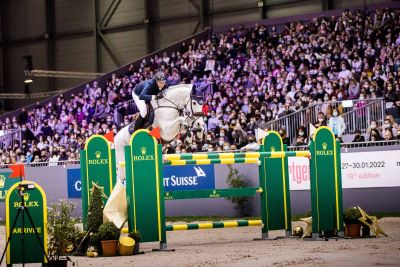 The Rolex Grand Slam of Show Jumping returns to CHI Geneva from 7-11 December 2022 with an action-packed schedule, including the 21st running of the Rolex IJRC Top 10 Final on Friday evening and pinnacle class, the Rolex Grand Prix on Sunday afternoon.

Held in the impressive Palexpo in Geneva, the world’s elite horse and rider combinations will tackle some of the toughest tracks of the year at is what is often considered the sport’s leading indoor show jumping venue. Taking part in this year’s show is a spectacular line-up of athletes including 17 of the top 20 riders, as well as 17 riders representing the home nation.

After his sensational win at in the CP ‘International’ at The CSIO Spruce Meadows ‘Masters’ Tournament, Germany’s Daniel Deusser will be looking to continue his impressive form in the Rolex Grand Slam of Show Jumping Majors, having won two of out the last three Grands Prix. Deusser will be aiming to continue his quest to become only the second person to have ever won the Rolex Grand Slam of Show Jumping, following Scott Brash’s triumph in 2015. Deusser will also be joined by fellow countryman Gerrit Nieberg, winner of the Rolex Grand Prix held at CHIO Aachen earlier this year.

Home favourite and defending champion, Martin Fuchs, will be the one that everyone has their eyes on. Having won the last two editions of the Rolex Grand Prix at CHI Geneva, the World No. 2 understands the precision, bravery, and athleticism required by horse and rider to be successful in this prestigious competition. Joining Fuchs is compatriot and three-time winner of the Rolex Grand Prix at this iconic venue, Steve Guerdat, as well as FEI World Championship teammates Edouard Schmitz and Pius Schwizer.