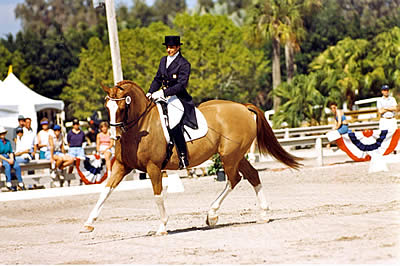 The secret to riding your dressage horse like a professional is to ride from half halt to half halt rather than from movement to movement. The half halt is your connective tissue between the dressage movements. They’re what make your daily ride or dressage test look like it flows seamlessly like a dance.

I rode with Olympian Robert Dover for many years. One of Robert’s favorite sayings is, “Amateurs ride from movement to movement. Professionals ride from half halt to half halt.” I think those are words to live by.

So when you think about your ride or start memorizing a dressage test for a horse show, don’t focus on the individual dressage movements such as, “I do a 10 meter circle here, and then I do a leg-yield there. After that, I do a lengthening across the diagonal.” If that’s what you do, your ride will look choppy and amateurish.

Instead, think, “Do a half halt to prepare for the turn from the centerline to the circle. Give another one to balance my horse before I start the leg yield. And give another one to coil the spring of the hind legs so my horse can ‘boing’ into the lengthening.”

Look at a dressage test sheet and map out (in writing!) where you’re going to give your half halts. Plan to give one every time you see any kind of transition.

Think of your half halts as the doorway through which you do every change of gait, movement, or bend. Without them, your ride will just look like a bunch of individual dressage movements strung together.

Also, keep in mind that transitions aren’t just from gait to gait. Transitions happen whenever there is ANY change. Those changes could be from a working gait to a lengthening and back again. Or from riding on a single track to starting a two-track movement like leg yielding or shoulder-in. Or changing from right bend to left bend on a serpentine.

So whenever you have any sort of change, make sure you give half halts first!