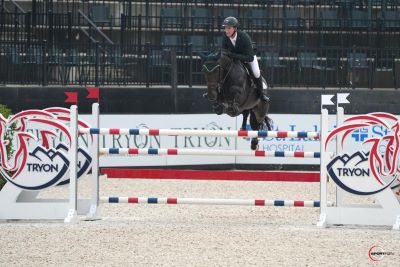 A thunderstorm that began midway through first-round action Saturday evening paused the competition, which resumed Sunday morning. Thirty-four riders attempted the first round of the Ken Krome (USA) course, with six riders qualifying for the shortened second round of the competition; three riders qualified during Saturday night’s competition and three qualified Sunday morning. Moloney earned his ticket to the jump-off on Sunday morning, and acknowledged that the delay was a benefit to his mount. “The weather helped me a little bit, I think!” Moloney said. “He’s a little bit more up under the lights, so he was more relaxed this morning.”

Moloney and Rocksy Music, the 2008 Irish Sport Horse gelding (Ars Vivendi x Diamond Serpent) owned by Equinimity LLC, have competed together for the last five years. “I’ve had him for five years, since he was an eight-year-old, actually!” he explained enthusiastically after his win. “He’s been jumping really well lately, so I’m really happy I got this win.”

As the Tryon Summer Series comes to an end, Moloney will be taking a vacation before maintaining the momentum of his win once he returns to competition in a month. Moloney concluded by saying, “I just want to thank the owners of the horse. I’d like to thank the groom and everyone that helped with this. It’s a team effort; there’s a lot of people involved!”