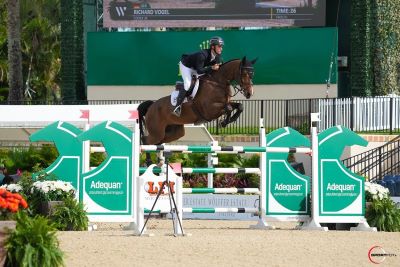 The highly anticipated 2023 Winter Equestrian Festival (WEF) season debuted this week at Wellington International. Germany’s Richard Vogel launched into the new year with a victory in the $35,000 Adequan® WEF Challenge Cup Premiere Round on Thursday. All eyes were on Vogel and his mount, Codex 28, as the pair stormed to victory over 11 other jump-off contenders.

A total of thirty-one entries jumped course designer Eric Hasbrouck’s (USA) first round. Of the twelve pairs that advanced to the tie-breaking round, eight were double clear. Vogel and Codex 28 (Contendros 2 x Espri) were the ones to beat, and they showed off an effortless and speedy final round finishing a quarter of a second ahead of two-time U.S. Olympic team gold medalist McLain Ward and Catoki.

Vogel and Codex 28, a 10-year-old Hanoverian gelding owned by Sportpferde Herbert, have a dynamic history together as the pair began their journey when the talented gelding was five years old. After competing for a time at the national level with its owner, Codex 28 is now back under the direction of Vogel and is pointed towards lofty goals. Vogel said that the athletic mount has to be one of his most “promising horses for the future.”

An ever-present “one to beat” in the Winter Equestrian Festival (WEF) hunter ring, Scott Stewart collected tri-colors in three divisions during the first two days of professional hunter competition at WEF. The first championship came in the Equine Tack & Nutritionals 3’9” Green Hunter division in the E. R. Mische Grand Hunter Stadium on Thursday.

Stewart, of Wellington, FL, piloted Jordan, a 10-year-old Selle Français gelding by Paname de Varnel owned by Sophie Gochman. Earning first, second, and third-place ribbons across the board, Jordan posted two scores of 88.5, 87, and 88 throughout four rounds of jumping.

“It’s exciting to be back – I love it here. I brought out a small group of horses and they all did well this week,” said Stewart of the start to his WEF season. “Sophie bought Jordan at the end of last year and he was champion throughout indoors. He’s such a good jumper and a real trier.”