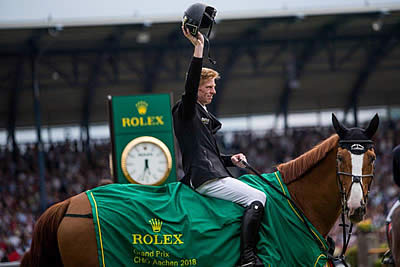 London, U.K. – July 24, 2018 – Following the exciting conclusion of the prestigious CHIO Aachen World Equestrian Festival in Germany on Sunday, Horse & Country TV (H&C TV) is proud to offer its U.S. audience the opportunity to relive all of the action in its exclusive coverage of the Mercedes-Benz Nations Cup CSIO5* and the Rolex Grand Prix CSI5*, part of the Rolex Grand Slam of Show Jumping, on Tuesday and Wednesday.

H&C TV will broadcast highlights from the Mercedes-Benz Nations Cup CSIO5* on Tuesday, July 24, at 8 p.m. EST and the Rolex Grand Prix CSI5* as-live on Wednesday, July 25, at 8 p.m. EST. Don’t miss one of the biggest show jumping events of the year! Join H&C TV to watch the coverage from Aachen here.

In addition to Tuesday and Wednesday’s broadcasts, a highlights show recapping the event will also air on Friday, July 27, at 8 p.m. EST.

Ehning is highly respected for his stylish, effortless riding and he didn’t disappoint. His partner Pret A Tout was also on top form, having led Germany to its third consecutive Nations Cup victory at Aachen earlier in the week on Thursday. Once again, the 15-year-old Selle Français gelding pulled off a perfect performance.

“First of all, I have to thank my horse,” said Ehning. “He has an incredibly good nature and knows his job! When he enters the ring and hears the crowd it gives him additional motivation.”

Ehning is now in the running for the Rolex Grand Slam of Show Jumping. The next leg will be held at Spruce Meadows in early September. Following Sunday’s victory, Ehning said he hadn’t planned on competing there but may have to take a second look at his competition schedule. After all, there is €1 million up for grabs!

Watch Ehning’s incredible display of horsemanship in H&C TV’s broadcasts of the Mercedes-Benz Nations Cup CSIO5* and the Rolex Grand Prix CSI5* at CHIO Aachen on Tuesday and Wednesday!