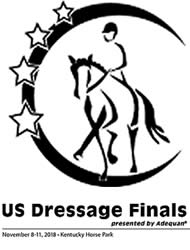 “It’s such a nice finish to the year in coming to the Finals because it really feels like a national championship. You hear the announcer saying riders’ names from all over the country, and it’s definitely something special to be a part of.”

For the last four years, rider/trainer Michael Bragdell has wrapped up his competition season by bringing horses to Lexington, KY for the US Dressage Finals presented by Adequan® on behalf of Hilltop Farm in Colora, MD. And once again, this unique championship show is a “can’t miss” event on his calendar as he prepares several mounts for the upcoming Great American Insurance Group/United States Dressage Federation (USDF) Regional Championships, where Bragdell hopes to qualify for a coveted invitation to return to the Kentucky Horse Park this November.

Every year excitement for the US Dressage Finals and Regional Championships seems to grow, and as competition gets underway this week in Region 4, it appears 2018 will be no exception: show officials report a 23% increase in the number of Regional Championship rides from when the competition was held at the same venue in Mason City, Iowa two years ago. Anticipation will only build as additional championships are scheduled across the country in the coming weeks, including Region 6 and 8 on September 20-23; Region 7 on September 27-30; Regions 5 and 9 during the week of October 4-7; and wrapping up with an exciting final weekend of qualifying in Regions 1, 2, and 3 on October 11-14. Besides providing a pathway for competitors to qualify for November’s US Dressage Finals, each of the nine Regional Championships will offer over $20,000 in prize money and awards, for a whopping total of more than $180,000 for the season.

Bragdell has already found his way to the winner’s circle at the US Dressage Finals several times and will compete in the upcoming Great American/USDF Region 1 Championships in Virginia in pursuit of qualifying 2017 Intermediate II Open Champion Qredit Hilltop, two-time Finals Champion Sternlicht Hilltop, and newcomer SenSation HW for this year’s Finals. He will be joined by Hilltop Farm Assistant Trainer Jessica Fay, who is also hoping to punch her ticket for her first trip to Kentucky.

As an internationally-renowned center for sport horse breeding and training, Hilltop Farm has made the US Dressage Finals an important part of their successful program. “The Finals have a real championship feel to them – the venue at the Kentucky Horse Park, especially the Alltech Arena, offers a ‘big’ environment for the horses that is important for their development and confidence,” said Managing Director Natalie DiBerardinis, who has attended the Finals three times to cheer on Hilltop Farm entries. “Our country is so large that most riders stay within their region, so to get exposure to top horses and riders from around the country gives you an entirely different perspective.

“The Finals also get a lot of coverage through the livestreaming, press coverage, etc. and that can be a great boost for a stallion, sales horse, or farm/trainer’s overall program,” DiBerardinis continued. “And there’s something for everyone: for the young horses, it offers an alternative goal for some that for a variety of reasons may not be pointed towards the young horse programs; for trainers with adult amateur students, it’s a great opportunity to combine their own championship goals with their students’ goals; and the Regions Cup competition adds a fun element as well. It’s just an extremely well-run and fun show, which keeps growing and each year seems to get better and better.”

As a reminder for all competitors, a horse/rider combination must declare their intention to participate in the US Dressage Finals by completing the Declaration of Intent form by midnight on the day prior to the first day of their Regional Championship competition (including any open class day before the start of championship classes). There is no fee to declare, but horse/rider combinations must declare at the level(s) and eligible division(s) they intend to compete in at the US Dressage Finals. Declarations may be submitted at this link: https://www.usdf.org/usdressagefinals/competitors/eiq.asp.

Don’t miss your chance to compete! The US Dressage Finals presented by Adequan® is a unique national head-to-head competition which offers a wealth of championship titles and over $100,000 in prize money, all while showcasing adult amateur and open riders from across the country in Training Level to Grand Prix. To learn more about the US Dressage Finals presented by Adequan®, download competition information, declare and nominate for the Finals, and sign up to receive news and updates, visit the official event website at www.usdressagefinals.com.

Source: Yellow Horse Marketing for the US Dressage Finals