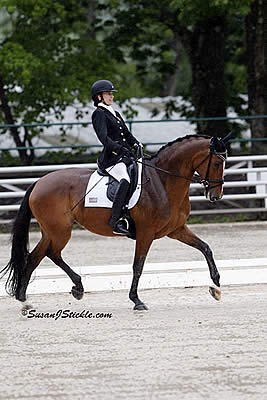 Gladstone, NJ – June 6, 2014 – For the sixth time in history, Grade II Para-Dressage rider from Unionville, Penn., Rebecca Hart, took home the 2014 USEF Para-Equestrian Dressage National Championship. Hart rode the Danish Warmblood Shroeter’s Romani to the victory. Shroeter’s Romani is owned by Rebecca Hart in conjunction with Margaret Duprey, Cherry Knoll Farm, Sycamore Station Equine Division, Barbara Summer, The Ruffolos, and Will and Sandy Kimmel. Earning the Reserve Championship was Grade Ia rider Margaret McIntosh and her own Rio Rio (Rheinland Pfalz-saar). The 2014 USEF Para-Equestrian Dressage National Championship/ Selection Trial for the Alltech FEI World Equestrian Games™ (WEG) was one of the most competitive Championships/Trials in Para-Dressage history. Para-Equestrians from around the U.S. traveled to Hamilton Farm at the USET Foundation Headquarters in Gladstone, NJ for their chance to earn a spot on the U.S. WEG Team and achieve top national rankings. The June 2-5, National Championship/Trials ground jury included President Kristi Wysocki (4*) USA, Adrienne Pot (3*) USA, and David Schmutz (4*) USA. Behind Reserve Champion Margaret McIntosh obtaining third place was Grade Ia athlete Roxanne Trunnell and her own Nice Touch. Fourth place overall went to Young Rider Sydney Collier and the Mecklenburg NTEC Cuplee, owned by Patricia Mendenhall. Fifth place overall was earned by 2010 WEG athlete Susan Treabess and the PRE Stallion Kamiakin, owned by Scott and Katie Hill and the sixth place accolade went to Angela Peavy and the Hannoverian Lancelot Warrior, owned by Rebecca Reno. The awards ceremony named the top horse/rider combinations in each of the five Grades in addition to the top horse/rider combinations selected for the long list for the U.S. Para-Dressage WEG Team. Also included in the final accolades was the Sportsmanship Trophy. The Sportsmanship Trophy was awarded to Marsha Cullen. The Sportsmanship Trophy is a Perpetual Trophy awarded to a Para-Dressage Athlete competing at the National Championship who best personifies the high standards and virtues of integrity, sportsmanship, honor, courage, team spirit, good temper and unselfishness. Cullen was presented with a take-home trophy during the final awards ceremony.

These selections will not be solidified until the competition has completed on June 5 and each ride is reviewed by the Selection Committee.

For more information about the 2014 USEF Para-Equestrian Dressage National Championship and the Selection Trial for the 2014 Alltech FEI World Equestrian Games™, please go to USEF.org.

Criteria to Determine Eligibility to Compete in the 2014 USEF Para-Equestrian Dressage National Championship may be found at: https://www.usef.org/_IFrames/breedsdisciplines/discipline/allparaequestrian/hpparaEquestrian.aspx.

For questions about the 2014 Para-Equestrian Dressage season, please contact the USEF High Performance Director of the Para-Equestrian Discipline Laureen K. Johnson at (908) 326-1155 or e-mail lkjohnson@usef.org.