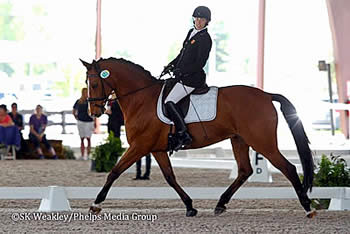 The mare was a bit spooky on Friday on a blustery South Florida day for the FEI Para-Dressage Team Test, but rallied on Saturday and Sunday to achieve high placings.

“It was our first big CDI and a big atmosphere,” Hart said on Saturday after her Individual test. “It was really good that I was able to ride her through it because we built more trust. I was happy that she came in and settled today and did the test and was actually listening and working with me.”

Missy Ransehousen, Hart’s trainer for eight years, was pleased with the duo’s performance.

“It was great,” she said. “You know, we don’t really know this horse very well and every day is a new day to get to know her. There are always things you have to learn and to fix, but overall it was a really nice ride. I was happy that she walked in and did her job.”

Hart is no longer allowed the use of Velcro straps on her legs as a compensation aid per an FEI ruling passed in January and she said it has been a challenge to learn a new way of riding. She has birth-onset hereditary spastic paraplegia, a degenerative disease that causes muscle wasting and paralysis.

“That’s also a new factor,” she explained. “My legs are less stable but she was really there for me. It’s nice to have a horse with that mentality, especially since we are so new together, that she’s willing to come up and support me when I need it. It’s a two way street: I’ll support her and she’ll support me.”

Sunday’s freestyle, created by Marlene Whitaker from Custom Freestyle, featured trot music to “Classical Gas” and the walk tour is “For You, Matthew.” Hart said she worked on getting more impulsion in the walk as well as more connection and pizazz in her freestyle. The choreography, created for her former mount, Lord Ludger, included half-pass and shoulder-in for added interest and is being used until a new one is created for Hart and Romani.

“She likes it,” Hart said. “She kind of likes to flip her toes a little bit. I love that she likes the music and goes with the rhythm and really gets into it. ”

“She was so good for me and she rose to the occasion,” Hart said. “She carried me beautifully. By the third day, my legs are a little tired. I needed her to step up and I really had that.”

Hart thought the two built on their trust this weekend and was pleased that the relationship between her and her horse is growing so quickly.

“She walked in there and she was totally chill,” Hart said. “She figured it out. The first day she was a bit unsettled and little overly exuberant.”

Grand Prix rider Todd Flettrich has been training Hart for the past month while she has been based in Florida. He also trained her the month before she left for London for the 2012 Paralympic Games.

“Missy [Ransehousen] deserves all the credit and Missy is always there for her,” Flettrich said. “Becca has taught me more than I taught her. That girl has an unbelievable work ethic and she does not allow her disability to run her life. I am delighted with her and with the horse. I hope this is the beginning of a long relationship.”

Hart and Romani’s next step is to travel to Europe March 22 to compete in CPEDI3* shows in Deauville, France, April 4-6 and in Moorsele, Belgium, April 25-27.

“We are hitting the ground running as a pair,” she said. “Then on April 29, I come home and we’ll have a few weeks and then we’ll go to selection trials.”

Hart knows that she wouldn’t be where she is without the help of her trainer and some generous individuals.

“It was a massively joint effort and I am honored to be a part of it,” the equestrian said. “I have a huge support system. It’s as much their victory as mine.”