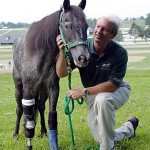 John Nicholson, executive director of the park, observed, “Molly is a classic example of the great things that can happen when good-hearted people step in to save the life of an animal.  It took a herculean effort to save her, but she has returned the favor a thousand-fold by giving so much back to mankind.  Molly and her owner, Kaye, are a small but formidable team that has set out to change the world a little bit at a time, and they are accomplishing their goal.  We are proud to welcome them back to the Kentucky Horse Park.”

Molly the Pony, who resides in Louisiana, will be at the Kentucky Horse Park on Saturday, April 17 at the John Henry Memorial Equine Adoption Fair to demonstrate the importance of equine rescue, rehabilitation and adoption.  She will make several appearances from 11:30am to 5pm at the New Indoor Arena.  The public is welcome to meet this courageous little pony who inspires people everywhere she goes.

Park Hours and Rates: From March 15 through Oct 31, the park is open seven days a week.  Admission is $16 for adults, $8 for children 7-12.  Children six and under are always admitted free of charge.  Admission includes the International Museum of the Horse – A Smithsonian Affiliate – and the American Saddlebred Museum & Gift Shop.