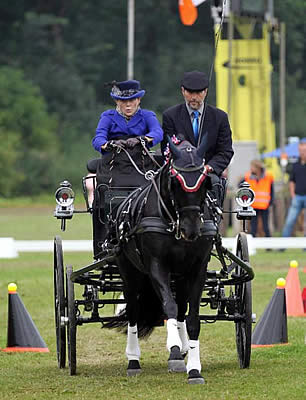 Beesd, The Netherlands – Stefanie Putnam made her European debut at the 2016 FEI World Para-Driving Championships and impressed with a stellar performance. As the sole U.S. representative, Putnam looked right at home competing against a strong international field. She partnered with Bethesda After Dark to finish fifth in the Grade I division.

Putnam (Lafeyette, Calif.) executed a solid test with her own Bethesda After Dark on Thursday in front of the Ground Jury of Andrew Counsil (GBR), Gun Hagring (SWE), Danuta Nowicka (POL), Henk van Amerongon (NED), and Reiner Wannenwetsch (GER). She and the 1993 Morgan gelding earned a score of 53.58 for fifth place. The pair attacked the Barry Hunter (GBR)-designed marathon course on Friday, having great times in obstacles two and three. They finished the marathon phase in eighth place, adding 100.92 penalties to their overall score to remain in fifth place. Putnam and “Shadow” finished their World Championship performance strongly by finishing third in the cones phase. They had a single ball down for 3.00 penalties and 5.83 time penalties to finish on a final score of 163.33.

Heiner Lehrter (GER) and Dashwood won Gold in the Grade I division with a score of 130.41, while Jacques Poppen (NED) and PP earned Silver on a score of 135.63 and Deborah Daniel (GBR) and Valeside Galaxy claimed Bronze on a score of 145.59.

Find out more about the FEI World Para-Driving Championships and view complete results.