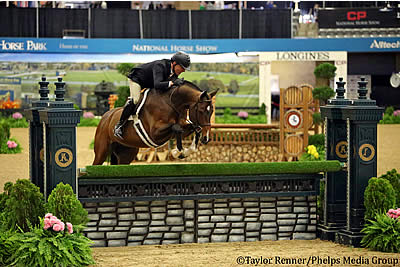 Lexington, Ky. – Oct. 31, 2017 – The 2017 CP National Horse Show at the Kentucky Horse Park got back underway on Tuesday with the professional hunter divisions. The nation’s best hunter horses and riders came together once again to kick off their respective divisions at the historic event on Halloween.

The morning commenced with the High Performance Conformation Hunter division, sponsored and presented by the Wheeler Family, where Kathryn Haley and Outshine, owned by Alexandra Worthington, won the first over fences class and the Yvonne Schulthess Memorial Challenge Trophy. Scott Stewart and Lucador, owned by Dr. Betsee Parker, won Tuesday’s handy round as well as the model class in addition to the Baroness of Locheil Perpetual Trophy and the “Henry the Hawk” Memorial Trophy.

In the Green Conformation Hunter over fences class, Havens Schatt and Playmaker, owned by JT Farm, claimed the blue ribbon. Schatt and the Holsteiner gelding have only been competing together for two months but show winning potential after their debut at the National Horse Show on Tuesday. Both the handy and model classes of the division once again went to Stewart, this time aboard Private Life, owned by Dr. Parker. Stewart and the 6-year-old gelding have had a very successful indoor season, winning the Green Conformation Hunter championship at the Washington International Horse Show, the Pennsylvania National Horse Show and Capital Challenge Horse Show.

Next up in the Alltech Arena was the Goshen Hill Green 3’6″ Hunter division, presented by Ms. Caroline Moran. Last to go in the classic round was Stewart and Luster, owned by Dr. Parker. The pair impressed judges Susan Schoellkopf and Robert Bielefeld to win the class, while Stewart also claimed third place with Wonderly, owned by Dr. Parker. In the handy round, Daniel Geitner and Walk the Moon, an Oldenburg gelding owned by Lynn Seithel, took home the win.

The Oare & Adikes-Hill Green 3’9″ Hunter division, presented by Mr. and Mrs. Ernest Oare and Ms. Patricia Adikes-Hill, saw Stewart grab back-to-back blue ribbons in the over fences and handy rounds with William Hill, owned by Gochman Sport Horse LLC. The pair have experienced great success this indoors season, winning the Green 3’9″ Hunter championship at the Capital Challenge Horse Show. Megan Young is also in the hunt for a tricolor ribbon in the division after riding to a second place finish in the classic round aboard EHM Equestrian LLC’s 9-year-old Holsteiner gelding, Kenan.

In the Judith Murch High Performance Hunter division, presented by the Corrigan family and Winners Circle Trailer Sales, Jennifer Hannan and Olympic Fire, owned by Roger Smith, clinched top honors and the “Captain Flash” Challenge Trophy in the classic round. Stewart maintained his winning ways, besting the competitive field to take the top three spots and the Edyth Lindner Trophy in the handy round with Catch Me in first, owned by Gochman Sport Horse LLC, A Million Reasons in second and Cameo in third place, both owned by Dr. Parker.

In the classic round of the Woodland Way, Inc. Amateur-Owner 18–35 3’3″ Hunter division, presented by Ms. Margaret O’Meara, Stephanie Danhakl rode to a one-two finish on her own Warmblood geldings Enough Said and Quest, respectively. Third place classic round finisher, Kendall Meijer, claimed the handy round victory aboard Moonwalk, owned by Copper Fox LLC.

The Meralex Farm and Hunt Ltd. Amateur-Owner Over 35 3’3″ Hunter division, presented by Ms. Bryan Baldwin and Ms. Gretchen Hunt, saw Seithel and her own 18-year-old gelding Walk The Line claim both the over fences and handy rounds.