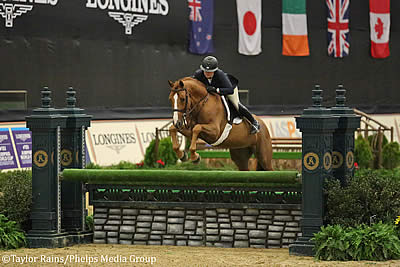 Liza Boyd and Tradition, owned by Maggie Hill, earned the win in the first over fences round of the Oare & Adikes-Hill Green 3’9” Hunter division, with Colvin finishing close behind in second place with Private Practice, owned by Brad Wolf.

Returning for the handy round, Colvin claimed the win with the 8-year-old Holsteiner gelding, who she won the 2018 USHJA International Hunter Derby Championship with in August at the Kentucky Horse Park. Boyd and Colvin are currently tied heading into the final phases of the division after Boyd also took home second place in the handy round.

Prior to the Oare & Adikes-Hill Green 3’9” Hunter division, Amanda Steege and Lafitte De Muze, owned by Cheryl Olsten, rode to the top of the leaderboard in the initial over fences round of the Goshen Hill Green 3’6” Hunter division, presented by Ms. Caroline Moran, while the handy round went to Holly Orlando and the 7-year-old Hanoverian mare Whisper, owned by Privet Farm, LLC. Back-to-back second place finishes went to Chris Payne and Still Water Farm LLC’s Fibonacci.

The Suzanne Thoben Marquard Amateur-Owner Over 35 Hunter division also got underway with Dudley MacFarlane and Roland Park, owned by Mount Fair Equine, LLC, claiming the win and the “Automation-Model Cadet” Memorial Perpetual Trophy for her performance in the first over fences round.

Becky Gochman and Gochman Sport Horse LLC’s Catch Me, an 11-year-old Holsteiner gelding, impressed the judges and scored the win in the handy round as well as the under saddle class, while Clementina Brown and her own Eagle took home second place in both over fences classes.