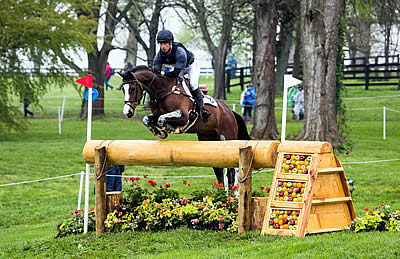 Lausanne (SUI), 26 April, 2015 – The scene is set for a gripping finale to the Rolex Kentucky Three-Day Event (USA), third leg of the FEI Classics™ 2014/2015, after New Zealander Tim Price just managed to hold off the challenge of his joint Dressage leader Michael Jung (GER) by a mere 0.4 of a penalty after a challenging day of Cross Country.

Price’s round on Wesko was a masterpiece of accuracy and fluency, but he was held on course for about nine minutes while a fence was repaired. Although he had to stand around getting soaked in the pouring rain, the delay ultimately played to his advantage as he finished four seconds inside the optimum time of 11 minutes 6 seconds with a fresh horse that is known to shine in the Jumping stadium.

Jung’s Cross Country riding on his old friend La Biosthetique Sam FBW, the horse that gave him European, World and Olympic titles, was breath-taking for its boldness and commitment. He finished just one second over time, but, so harmonious is this partnership, it’s hard to see where he could have saved it.

The 32-year-old German is also in third place, within a Jumping fence of the leader, on his first horse, FisherRocana FST, having finished free of time penalties when the ground was at its best at the start of the day.

“I think the hold was a benefit because with a horse like mine you can just pick up and go. He jumped really well and dug deep when required,” said a delighted Price. “I couldn’t be happier with the horse. After last year in Normandy [at the Alltech FEI World Equestrian Games™] when we didn’t finish the course, it’s nice to come here and get this one under our belt.”

Jung, returning to Kentucky for the first time since winning the world title in 2010, was visibly elated to have the 15-year-old Sam back in action after a layoff in the second half of last season. “I feel so safe on him,” he said.

“He was wonderful and gave me such a good feeling, still galloping very well at the end. The ground was wet but not too deep because the course had been prepared so well.”

With major thunderstorms expected, Cross Country was brought forward and horses run at three-minute intervals in an attempt to beat the weather. It still rained very heavily, though, and four of the six riders to achieve the optimum time went in the earlier part of the day.

William Fox-Pitt (GBR) predicted that his 2014 winner Bay My Hero, which is not full Thoroughbred, might struggle with the time if the ground became wet. They had a beautiful round, with Fox-Pitt masterfully finding the best going for his horse, but their 8.4 penalties has dropped them a place to fourth.

A determined Bill Levett (AUS) bucked the trend when he ran near the end of the day on Improvise and, despite a couple of erratic moments early on, managed to finish within the time to rise 14 places to fifth.

Will Coleman (USA), riding Obos O’Reilly, leapt from 31st to eighth with a clean sheet and earned himself the use of a Land Rover for a year as the American rider finishing nearest the optimum time.

Colleen Rutledge (USA) gave a brilliant display of pathfinding on her experienced horse Shiraz, rising from equal 49th after Dressage to 14th. Later on, she rode an equally proficient round on her home-bred Covert Rights, dropping from fifth to 10th place with 12 time penalties.

There were 46 finishers from the 71 Cross Country starters; they produced 33 clear rounds and some brave displays of riding in the testing conditions.

Kentucky first-timer Elisa Wallace, who has risen 10 places to 12th on Simply Priceless, was particularly impressive. “I knew I would have to ride my butt off at my first four-star, but I felt my horse and I were a good team and attacking the course,” she said. “We eventers don’t melt! We have to ride in the rain and suck it up.”

Five of the top 10 after Dressage departed from the scoreboard. Mackenna Shea (USA), sixth, had a fall with Landioso at the double of corners (fence 21) and Laine Ashker (USA), seventh, had a refusal with Anthony Patch at the angled brush at Fence 9b.

Lauren Kieffer (USA), eighth, retired Veronica after a glance-off in the Head of the Lake and Marilyn Little (USA), ninth, retired after an early stop at fence 5 on RF Demeter. Jessica Pheonix (CAN) withdrew LLC Pavarotti.

Will Faudree (USA), who is in 20th place on Andromaque, hit the open corners at fence 21 and became the first CCI4* rider to incur 11 penalties for breaking a frangible pin under the new rule.

Britain’s Francis Whittington (GBR), currently 16th, was lucky to avoid the same fate when Easy Target slid across the corner at the Land Rover Hollow and comprehensively demolished it. Fortunately for his score, it was not a pinned fence; the pair continued quite unscathed and the fence-repair team did an admirable job to rebuild it so quickly.

Course Designer Derek di Grazia should be pleased with his day’s work; his track earned plenty of plaudits, exerted the right influence and produced a great day for the sport, despite the awful weather. Now, though, all thoughts turn to the final Jumping phase and the intriguing question of whether Tim Price can continue to hold off the phenomenal Michael Jung.

Follow all the action live for the Jumping, which starts at 1pm Kentucky time on www.feitv.org with live results on www.rk3de.org and see the Cross Country review on FEI YouTube here: https://youtu.be/3ovg_vK2E6E.