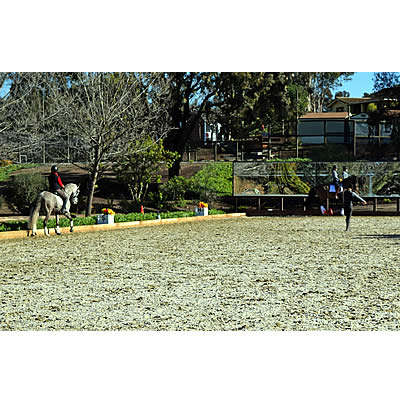 San Diego, California (January 8, 2016) – As a series of storms pummel California this week with one of the strongest El Niño weather systems on record, many equestrians find themselves extremely limited with the excess of flooding in paddocks and riding rings. However, with early preparations to the warnings of the upcoming El Niño year, some wise equestrians have installed an elite arena system that allows them to “walk on water” during this massive storm.

U.S. Olympian Steffen Peters knew that selecting an arena footing system for his California training facility was of utmost importance, especially with the threat of harsh storms and heavy rain. That’s why he chose to train on riding surfaces provided by Premier Equestrian, a leading industry innovator in arena footing. Steffen selected the advanced OTTO Sport arena. Premier Equestrian is the exclusive North American distributor for German based OTTO Sport-und Reiplatz GmbH. Now, even through the record-tying flooding, potential flash floods, and mudslides, Peters’ facility continues to function smoothly with riders and horses out and about training on the Premier Equestrian and OTTO Sport arena system.

“OTTO Sport offers a system of drainage, concussion relief, biomechanics benefits, and longevity,” said Heidi Zorn, President of Premier Equestrian. “The OTTO Sport system is a proven product that has been around for over thirty years. Many arenas are still standing and performing as well as they did the first day the system was installed thirty years ago.” This is why several “Premier Equestrians,” riders like Peters who are people dedicated to the development and preservation of horse sport, have chosen to put the OTTO Sport system under their winning horses’ hooves.

The OTTO system centers on the OTTO Sport Perforated Mat. This arena base mat system provides maximum drainage, concussion mitigation, stability for horse and rider, and a proper and durable separation of footing and substructure. Drainage holes in the mat remove excess water quickly, making the arena useable immediately after persistent rain. Built-in reservoirs hold enough water to rehydrate the footing later. These features make the OTTO Sport Perforated Mat System universally suited for any arena or farm in the world, and crucial in times of extreme weather.

Another key factor in Peters’ arena is the revolutionary Premier HT footing, which stands for Hydration Technology. This is a programmable textile footing that can be configured to uptake water at different levels and rates. The HT footing drastically reduces the amount of water needed to maintain an ideal riding surface, and reduces the amount of time spent maintaining the arena. Premier HT will always maintain the appropriate hydration whether it be drought or flood conditions.

Peters and his wife, USDF Gold Medalist Shannon Peters, believe that this advanced arena system and footing are essential, and their arena has truly proven its worth throughout the series of intense El Niño storms. Peters continues to train with Akiko Yamazaki’s Legolas 92 and Rosamunde 20, while the majority of the Californian equestrian population without the arena system is virtually stall bound. Yamazaki, another Premier Equestrian, also planned ahead and installed the OTTO Sport arena system before the storms hit. Peters and Yamazaki were originally introduced to the OTTO Sport arena system at the 2006 Word Equestrian Games in Aachen, Germany, where the system held up against two weeks of heavy rain.

Keri Homer, the barn manager for Steffen and Shannon Peters at Arroyo Del Mar, remarked that before the Premier Equestrian and OTTO Sport arena system, they would have had to close the outdoor ring with no telling when it could be reopened in the massive amount of flooding. Homer states, “Today, we are playing in the rain on stable, safe, and consistent footing. Let El Niño in – we are ready!”

Dave Martin of Footings West, who worked with Premier Equestrian to install the OTTO Sport arena at Peters’ facility Arroyo Del Mar, has been paying close attention to the arena’s maintenance during El Niño. Martin states, “The Arroyo Del Mar arena is the only outdoor arena in all of southern California that is 100% usable even for heavy equipment. The performance of the OTTO Sport arena system is beyond anything I have ever seen in my 35 years of arena construction,” he remarked.

Founded in 1999, Premier Equestrian is the Official Dressage Arena of the United States Equestrian Federation and the United States Dressage Federation. For more information about Premier Equestrian, visit www.PremierEquestrian.com or call 1-800-611-6109. To see more news about this press release, visit http://premierequestrian.com/category/pressrelease/articles/PR-dry-heaven-in-midst-of-powerful-El-nino-storms.html.