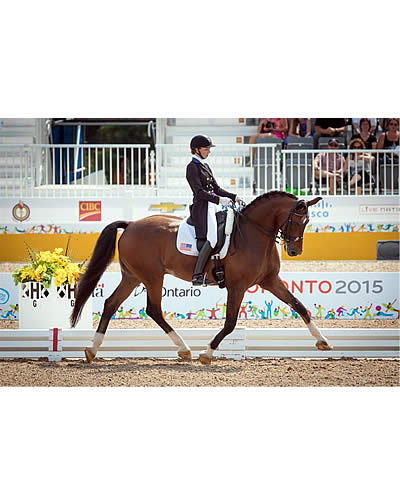 Toronto, Canada (July 15, 2015) – Premier Equestrian, maker of world-class dressage arenas, arena footing, and horse jumps, was thrilled to watch the U.S. Dressage Team take the 2015 Pan American Games by storm. The company was especially excited to cheer on Steffen Peters and Laura Graves, who use Premier’s products and have been dubbed “Premier Equestrians” by the company. After helping the U.S. to Team Gold, Peters earned the Individual Gold medal and Graves took home Individual Silver. The Team Gold medal, earned with a team total score of 460.506, guarantees the U.S. a spot in the 2016 Olympic Games in Rio.

The revolutionary design of the Brentina Arena solves problems previously associated with multi-rail arenas. “The 18 inch base cone is extremely stable in high wind and the rails snap into each base to release upon any force or impact, thus providing safety for horse and rider,” Rustad explains.

The arena is named after Olympian and fellow “Premier Equestrian” Debbie McDonald’s famous mare, Brentina. “We are very particular about what equipment we use in our training facility,” said McDonald. “Not only did this arena pass our inspection, but we felt it was such an exceptional design providing form and function with the highest degree of safety, that we gave it our finest approval by naming it the Brentina Arena.”

Laura Graves, Silver medalist in Tuesday’s Freestyle competition, trained in preparation for the Pan American Games under McDonald at Rivergrove Farm in Hailey, Idaho. Graves, a self-proclaimed underdog with what is shaping up to be a “fairytale” story according to CNN, has had a journey to international success that has caught the eyes of many equestrian enthusiasts. She and her Dutch Warmblood Verdades (Florett AS- Liwilarda, Goya), known as “Diddy,” have captured the hearts and the attention of spectators around the world. Purchased in The Netherlands, based solely on a video, Diddy arrived as a fiery and “explosive” six-month-old. The now thirteen-year-old Diddy grew up on the Graves’ family farm in Vermont, and then moved with Graves to Geneva, Florida, where the duo began their dressage career.

Peters and Legolas 92, a thirteen-year-old Westfalen gelding owned by Four Winds Farm LLC, battled impressive rides, especially from the host country riders. After the team competition results were final, Peters stated, “The Canadians did a wonderful job. They rode extremely well. I couldn’t get the thought out of my mind that we might not be going to the Olympics. It kept me fired up enough to put in the performance that we did.”

USA claimed the Team Gold medal on Sunday, and finished out the Pan American Games with red, white, and blue leading the scoreboard. Peters brought his best to the show ring for the Intermediate I Grand Prix Freestyle, on his mount, Legolas 92, scoring a 80.075 percent to earn first, with Graves and Verdades following at a 79.825 percent.

Premier Equestrian’s world-renowned expert arena footing, dressage arenas, and revolutionized horse jumps are crafted and designed to be perfect for riders of any level. Learn more about the company and its outstanding Premier Equestrians at www.PremierEquestrian.com.