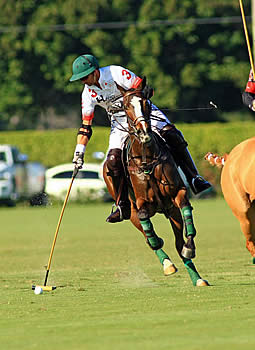 Wellington, FL – January 25, 2015 – In the spirit of Martin Luther King Day, polo players and spectators contributed their time and gracious donations to The Leukemia and Lymphoma Society at the Polo for a Purpose event at International Polo Club Palm Beach. The charity polo game featured eight of some of the best polo players in the world, including Nic Roldan, Kris Kampsen, Jeff Hall and Honorary Chairman Brandon Phillips. Phillips is a Non-Hodgkin’s Lymphoma survivor and helped to organize the event which gives 78 cents from every dollar back to The Leukemia and Lymphoma Society for patient services and research. Although the game ended in a 7-7 tie, everyone went home a winner, especially those positively affected by today’s contributions. Event chairs Visse Wedell and PJ Rizvi put on an outstanding event for the Leukemia and Lymphoma society, bringing the world one step closer to being cancer-free.

After Tom Blake sang the National Anthem and two-time cancer survivor Bruce Steinberg bowled the ball in from the sidelines, Kris Kampsen started the game with a swift steal before both teams ping-ponged the ball back a forth across the field. But it was Sugar Erskine to who scored the first goal of the game at the north end of the Engel and Volkers Field. Jeff Hall put his gorgeous grey mare to good use for a quick run through traffic, slamming the ball through goal in stylish fashion. In his classic open polo style, Brandon Phillips received the next ball from team-captain Nic Roldan to bring the score 3-2 but Jeff Blake quickly tied up the game with a high-flying goal straight from the center of the field, 140 yards out from goal. The first chukker ended 2-2.

The second chukker saw some smart moves from Erskine and Roldan but Blake read the play early and let their attempt at goal roll just wide over the inline. Hall, yet again showing off his fantastic young string, made for a great horse-race and knocked it through the goal posts, bringing the score 3-2. But Roldan wasn’t about to let his skills go unnoticed, making a textbook nearside backshot to Carlos Gracida but brother Mariano got the hook in and passed it to Kris Kampsen who matched Roldan’s nearside backshot to make the sure the ball was out of the red zone. Blake picked up the play; Roldan stole it with the kind of tricky play that makes him one of America’s highest rated players. Roldan’s pass to Erskine and through the goalposts brought the score 4-3. After the last throw in of the chukker, Blake hit the ball out of the air and ran down field with just seconds left on the clock to bring the score 4-all.

Carlos started the third chukker by doing what he does best-making players catch him but a bounce off the pony’s hoof resulted in the ball rolling just wide of goal. Roldan quickly turned defense into offense, galloping all over the field with several failed attempts on goal but finally Phillips put the ball between the goalposts to bring the score 5-4. Hall’s quick bay mare and an intuitive play brought the ball back to the opposite end of the field, making it an even score once again, 5-5. After the throw in at the center of the field, the players showed off their stick work but Carlos came out on top despite his lower handicap, scoring his first goal of the game and elevated the score 6-5. Kampsen’s belly shot from the last bowl in resulted in another accurate stroke through goal to end the chukker 6-6.

The heat was on in the beginning of the fourth and final chukker. Kampsen put the flame to Phillips’ solid defense, changing the direction of the play, bringing the score 7-6 in favor of the Hadden Landscape team. Kampsen made another steal and breakaway but Roldan slammed the ball in the air, in a tennis-like fashion for a great show of polo. Erskine fired from the 60 yard line but it was just wide. Crowd favorite Roldan danced around the defensive players and made a shot on goal but it hit the goalposts in dramatic fashion, igniting screams from the sidelines. Erskine avoided some attempted hooks, finally guiding the ball through the orange posts, making the score 7-7. After a horse change time-out, the last throw in was won by Hall who battled back and forth with Kampsen all the way to the end of the field but Erskine smacked it out of the red zone. The final horn blew, resulting in a tie game, 7-7.

The day ended with Phillips being recognized for helping to organize an event that hits so close to home. “I’m very happy to be part of this event,” Phillips said. “This is the second year we’ve done this. Last year it was about a quarter of the size so it was great for IPC to give us the field and the stadium. It made for such a good day,” he said. “We [the players] all know each other so well. It’s a good group of guys. It’s fun to play with your friends and have a good game.”

Jeff Hall agreed. “It was really great to play with Brandon today in this event. At the luncheon, the stories were so touching. It was good to raise money and to be part of it.”

Steinberg was incredibly thankful and appreciative of the event today as well. “Because of things like this, events and charities, I can be here with you and explain how great what you all are doing here today is,” Steinberg said. “You’re not just sitting here doing nothing; you guys are really making a difference in people’s lives,” Steinberg explained.