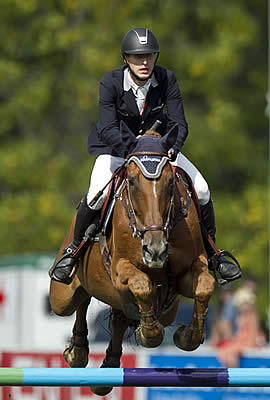 Calgary, AB, Canada – September 8, 2013 – The highlight event of the season wrapped up the Spruce Meadows ‘Masters’ with some of the best show jumping competition in the world. Pieter Devos of Belgium rode Candy to victory in the $1 Million CN International, part of the Rolex Grand Slam of Show Jumping, over Olympic gold medalist Steve Guerdat (SUI) on Nasa and France’s Penelope Leprevost with Nayana.

The opening field had 39 entries, and the top 12 returned for the second round over courses set by Leopoldo Palacios of Venezuela. The riders praised Palacios’ course design, and Guerdat noted, “I think Leopoldo has done a really, really good job this week. It was strong, it was big, but today I can’t say there was anything that was too much.”

The challenging first round had eight clear rounds, and the first to return over the second course was Roger-Yves Bost (FRA) on Nippon d’Elle. They had trouble at the double combination to end up eliminated. Shane Breen (IRL) and Balloon also had a tough day when they accumulated 30 faults to end on a total of 34 for tenth place. Francois Mathy (BEL) on Polinska des Isles added 13 to their original four to finish on a total of 17 and ninth place.

Canada’s Eric Lamaze and Powerplay had two rails and a time fault, and through their 10 total faults, they finished in eighth place.

Next in was Guerdat on Nasa, a 12-year-old Selle Francais mare by Cumano x Prince d’Elle. They were clear in the first round and put in a beautiful second round trip. They stopped the timers in 74.15 seconds, which at the time gave them two time faults. Prior to the next horse starting, the time allowed was raised to 71 seconds, taking Guerdat’s total down to one fault. That fault would be the difference between second place and the opportunity to go to a jump-off for first.

“I’m really happy about the second place,” Guerdat said. “I know time is always a bit of an issue with me and Nasa. I don’t think she’s a slow horse, but she needs a little bit of time to relax between the fences. I wouldn’t have changed a lot. I think if I wanted to stay clean, I had to make that round that I made. I’m not disappointed at all about the time. I don’t think there was space that I could save time without having a fence down.”

Beezie Madden (USA) and Simon had the dreaded bicycle jump down for faults, but also had one time fault for a total of five and sixth place. Ian Millar (CAN) and Dixson had a miscommunication at fence 5, causing rails to fall. Millar circled to gather himself and went on, but after another rail fell, he retired.

German’s Patrick Stuhlmeyer and Lacan 2 were also victims of the bicycle vertical and with just four faults, they finished in fifth place. Christian Ahlmann (GER) and Taloubet Z looked on form, but a rail at the “a” obstacle of the triple combination gave them four faults as well and fourth place.

Devos and Candy, an 11-year-old Belgian Sport Horse mare by Nabab de Reve x Etretat, were the next ones in. In the first round, they went early in the 14th spot, but a quick clear gave them a better place in the order for the second round. The big mare galloped around the course and gave fantastic efforts. Devos lost his stirrup after the triple combination at fence 9, and was able to just get it back in time before fence 10, the CN planks, which was the second to last fence. They cleared the final oxer as the only clean round in a time of 70.99 seconds, just 1/100th of a second inside the time allowed.

“I don’t want to think about it!” Devos laughed afterward about his close time. “I was just in time. Steve was maybe not too happy about that.”

Devos mentioned that losing his stirrup was likely a complication of his injured leg, which happened when he and Candy had a hard fall on Wednesday. Luckily, Candy has no injuries or ill effect from the fall. “My leg was on top of the pole and Candy fell on me. I was really lucky because at the beginning I thought my leg was broken,” he revealed. “I was very lucky that I could ride again and now I win. It’s really bruised and was completely swollen, (but) now it’s okay. I don’t feel the pain now!”

Although he was clear, Devos still had to wait and see what the last two riders would do. World Number One Ben Maher (GBR) and Cella knocked down two jumps for eight faults and seventh place. As the last rider in the ring in both rounds, Penelope Leprevost (FRA) had all of the pressure on her. She relied on Nayana, a 12-year-old Selle Francais mare by Royal Feu x Narcos II. All was going well until fence 10, when they brushed down the top plank to finish with four faults. Leprevost’s faster time in Round One gave her third place.

Leprevost said that Nayana is new to this level. After a strong performance on Wednesday, she changed her plan to take Nayana in the Nations Cup and instead saved her for today’s competition. “My mare was fantastic. She was super the first day, so we changed the plan. We wanted to keep her fresh. I had the plank down, but it was my fault. She is always fighting and she is very brave,” she expressed.

All three of the top horses are mares, and Devos, who is just 27, was able to rely on Candy and the long relationship he has had with her. He started riding Candy as a six-year-old, and after some time off for embryo transfers, she was back with Devos at eight years old. Devos said from there, she jumped right into the bigger levels. Candy’s dam is a full sister to Canada’s iconic show jumper, Big Ben. “She’s really a lovely horse with a super head. She always wants to do her best and she’s just great. She has a lot of scope and she’s careful and she wants to do everything for me,” he described. “She has a really big canter and a lot of scope. The circumstances here were perfect for me.”

As today’s winner, Devos has a chance to win substantial bonus money in The Rolex Grand Slam of Show Jumping. The Spruce Meadows ‘Masters’ is host to the second leg after the Rolex Grand Prix of Aachen and before December’s CHI Geneva. It is the first global initiative to reward the outstanding rider who wins the Grand Prix at each tournament in succession. Any rider that wins the Grand Prix at each of the three tournaments consecutively will receive €1 million bonus on top of the prize money for each tournament’s Grand Prix. Moreover, any rider that wins two out of the three tournaments’ Grands Prix will also receive a bonus of €500,000 in succession or €250,000 for winning two out of three.

This was Devos’ first time competing at Spruce Meadows and he was awed by the arena when he first stepped into it. “I heard a lot about Spruce Meadows and this great show. I was thinking you would have to come here two or three times before you can perform in a really good way. You have to know and train. For me, it’s a very big surprise that I won here. Now I start to realize what I won and it is just great.”

“It’s a dream come true,” said Devos. “To win here is great, but to win the grand prix is unbelievable.”

Earlier in the day there was another Belgian win, this time for Ludo Philippaerts on Quintender 2 in the $50,000 Telus Cup 1.50m. Philippaerts was the fastest clear over the speed course. Shane Breen (IRL) and Touch of Chilli were second, while Martin Fuchs (SUI) and PSG Future were third.

Spruce Meadows is thrilled to commence another fantastic ‘Masters’ Tournament and thanks all of the exhibitors, sponsors, spectators, staff, and volunteers on an amazing competition.