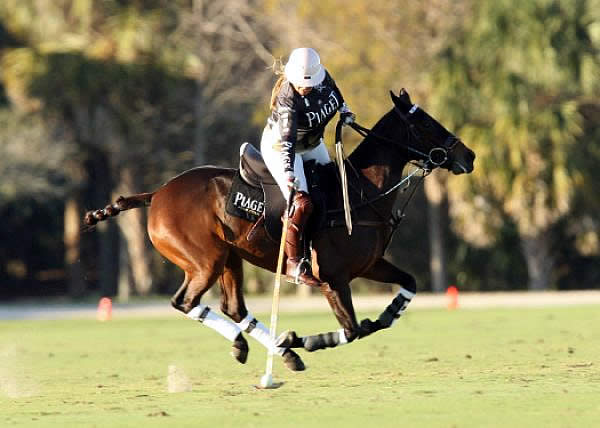 The defending champions, leading by two goals in the third and fourth chukkers and three goals in the fifth chukker, lost a heartbreaking 12-11 decision to Lucchese.

“The game could have gone either way but I felt we should have been ahead the whole game, too,” Piaget coach Joey Casey said.

Grand Champions Polo Club-based Piaget finished the tournament with a 2-2 record and is now preparing to switch gears for the 26-goal season that begins this week with the CV Whitney Cup.

Piaget, with 10-goalers Miguel Astrada and Sapo Caset, opens against Alegria on Friday at 10 a.m. at International Polo Club Palm Beach and will be among top contenders for the prestigious cup.

On Sunday, Piaget trailed 5-4 after two chukkers before Astrada took over. Piaget overtook the lead, 7-6, going into halftime on Astrada’s penalty-two goal. Astrada, scoring from all over the field on lofty 60-yarders and penalty shots.

Astrada led his team with seven goals, including four on penalty shots, and finished the Ylvisker Cup tournament among scoring leaders with 32 goals including 17 penalty shots.

Taking a pass from Juan Bollini, Piaget player-padrone Melissa Ganzi raced downfield with two big hits to score her team’s eighth goal for an 8-6 lead. After Lucchese cut the lead to one, Bollini scored on a back shot to return to a two-goal advantage, 9-7, to finish the fourth chukker.

Piaget’s momentum continued in the fifth chukker taking a 10-7 lead after Astrada took the throw-in and drove down the field for a goal. Lucchese started coming back behind Tincho Merlos, who scored two more goals before Astrada scored as time ran out to remain in the lead, 11-9.

Piaget had opportunities in the final two minutes of the game but couldn’t capitalize on a penalty goal opportunity or Bollini steal.

“We had a bad luck chukker,” Astrada said. “They had some fast horses and they made the difference in the last chukker. We played well, but not as well as in the other games. We were up on the scoreboard but not playing really well. They made it a very close game and didn’t allow us to run. It was a good 20-goal season anyway.”

Joaquin Panelo, Ganzi and Bollini each scored a goal. All three also played well defensively. Lucchese’s Tincho Merlos, replacing his older brother Sebastian in the lineup after being sidelined with broken ribs sustained in a polo game, scored a game-high ten goals.

“It was a really strange game,” Casey said. “We played well today. We had a couple bad breaks at the end.

“Everybody played well on the team,” Casey said. “It was just one of those days. We had a problem with our throw-ins and then we thought we got it fixed. Then at the end we didn’t.

“Bollini had a phenomenal game, he is playing incredible,” Casey said. “Joaquin played well today. Miguel was his usual 10-goal self and Melissa played very well.”

Both teams had to contend with dropping temperature and wind gusts late in the afternoon.