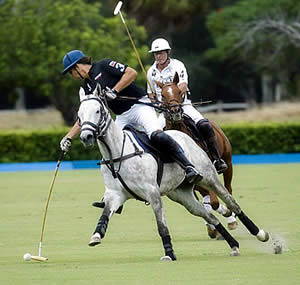 Beluga’s Luis Escobar (3) and his pony lean into his shot with Piaget’s Juan Bollini (4) closing in on defense. Photos by Scott Fisher.

WELLINGTON, FL – Nov. 4, 2013 — On a windswept day at Palm City Polo Club in Boca Raton, Piaget and Berlin Polo advanced to the semifinal round of the USPA 2013 Beluga North America Cup.

In two fast-and-furious games, Piaget defeated Beluga, 9-8, in the first game of the quarterfinal doubleheader and Berlin Polo came from behind to defeat ELG, 11-9, to advance into Thursday’s semifinals.

Audi will play Berlin Polo at 9:30 a.m. and Casablanca will face Piaget at 3:30 p.m. Both semifinal games will be played at the Fire Station Fields in Wellington.

The championship game is Saturday at 4 p.m. after the consolation game at 2 p.m.

The highly-anticipated Grand Champions 20-goal season more than lived up to expectations despite the wind gusts between 20 and 30 miles per hour making it challenging in both games.

Piaget (Melissa Ganzi, Tommy Biddle, Piki Alberdi, Juan Bollini) and Beluga (Misha Rodzianko, Carlos Baez, Luis Escobar, Michael Dorignac) were tied five times in the first four chukkers before Piaget extended its lead to an 8-6 lead on a goal by Ganzi with an assist from Alberdi at the 4:21 mark of the fifth chukker.

Escobar scored early in the sixth chukker to cut Piaget’s lead to one goal (8-7), but Biddle’s penalty goal gave Piaget a two-goal lead until the final seconds when Escobar scored again.

“This was a very good way to start the tournament,” Bollini said. “It’s always nice to win, starting out slow with no double horses. We controlled the entire game and momentum. It was our fault that they came back. We slowed down a bit but we were still in control of the game.”

Biddle was a last-minute replacement for Jeff Hall whose travel plans were delayed. Biddle, who was headed to Aiken, S.C. to pick up his horses, got the word on Monday afternoon that he was playing with Piaget.

“It was fun,” Bollini said. “I usually don’t play two; usually I am the guy who is the quarterback. I went from being the captain to being the soldier.”

Added Bollini: “Tommy played fantastic today. He played the two position, which he doesn’t play much and didn’t complain. He was unbelievable, a true team player. We have a fun team.”

The lightning-quick Alejandro “Piki” Alberdi, an Argentine polo legend at age 50 rated at 8 goals, scored a game-high six goals with deft mallet play on both sides of the horse.

Biddle added two goals and Ganzi had one. Escobar led Beluga with four goals and Dorignac and Rodzianko each scored a goal. Beluga opened with a 2-0 lead by handicap.

“It’s always a good way to open a tournament with a win, especially with the wind,” Alberdi said. “The wind was very difficult to play. We have Juan Bollini, who is a big hitter, but today with the wind the ball goes everywhere.

“Instead of hitting big we had to control the ball more on the ground and I think it worked well,” Alberdi said. “I was very lucky today. I played beautiful horses from Melissa, the team passed the ball to me and I scored the goals. The team played very well together.”

Alberdi and Bollini, who grew up together in polo, played in England where they won the Gold Cup.

“Piki and I have been friends for a lifetime; we can play with our eyes closed,” Bollini said. “It is so easy to play with someone like that. I know where he is at all times because we have played so many years together.”

Ganzi was thrilled with the win even though it now pits her against her 15-year-old son Grant on Casablanca. “It’s very exciting for us and to win for Piaget,” Ganzi said. “It is a great team and we came together well.”

Rodzianko was hit on the forearm with a mallet with 1:37 left in the fifth chukker which stopped the game so he could be attended by paramedics. Rodzianko was able to return to the game but was icing afterwards. Beluga will play in Saturday’s subsidiary game.

“This is good polo, a very nice level,” Rodzianko said. “I think the difficult thing is switching teams every week and playing with different people. It’s a great experience and I am very thankful that the Ganzis put the season on. It’s an incredible opportunity for me. It’s cool I get to play at this level and get better. It’s always a pleasure playing with the legends like Alberdi.”

In the second game, ELG (Avery Chapman, Guille Aguero, Kris Kampsen, Carlucho Arellano) jumped out to a five-goal lead in the second chukker (6-1) and controlled the tempo for an 8-4 halftime lead in what looked to be a one-sided contest.

After a few adjustments, Berlin Polo (Moritz Gaedeke, Hector Galindo, Sugar Erskine, Jeff Blake) found its chemistry in the second half and started to mount a comeback while ELG collapsed.

Erskine sparked the rally starting the fourth chukker off with a 60-yard penalty shot and then scored from the field to cut ELG’s lead to two (8-6). Blake added another goal to come within one (8-7).

Erskine finished with six goals including three on penalty shots. Gaedeke and Galindo each had two goals and Blake added one.

Kampsen, playing his first tournament as a newlywed, led his team with four goals. Arellano had two goals and Chapman scored one.

ELG’s Guille Aguero escaped serious injury in the fourth chukker when his horse stumbled, threw Aguero and bolted off the field, returning safely to the warm, dry horse trailers.

The three-day, six-team USPA 2013 Beluga North America Cup is the first of two 20-goal fall tournaments at Grand Champions. The other 20-goal tournament is the Nov.13-24 USPA National 20-Goal Championship.

On Saturday Beluga Noble Russian Vodka will be served in the Beluga VIP tent during the polo doubleheader and post-tournament party.

Beluga Noble Vodka is produced in the heart of Siberia, one of the most ecologically clean in Russia.

Beluga Noble is refined in every way. Thanks to its unique production technology, including both innovations and centuries-old traditions, the flavor of Beluga Noble has an irreproducible smoothness.

All the ingredients of Beluga Noble pass through a strict system of purification and filtration, which guarantees the maximum level of purity and quality in the final product. Beluga Noble “rests” for 30 days.

The refined design of the bottle with hand-made elements perfectly reflects the nobility of Beluga Noble. On every one of the bottles there is one important feature, a small Beluga fish, traditionally fitted by hand, making every bottle unique.

Also this week is the Palm Restaurant Invitational (Friday and Sunday), the seventh and final medium-goal tournament at Grand Champions.