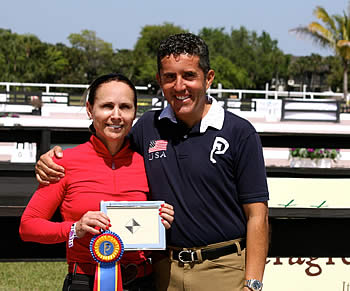 Wellington, FL (January 3, 2013) – Getting one’s horse ‘in a frame’ is a foundation for good riding but when the 2014 Adequan Global Dressage Festival (GDF) opens January 8 at the Palm Beach International Equestrian Center in Wellington, it’s adult amateur riders going in to frames – and silver ones at that – thanks to a the Piaffe Performance Adult Amateur Achievement Award, sponsored by Dr. Cesar Parra and Piaffe Performance Farm.

Now in its second year at the GDF, the Piaffe Performance Adult Amateur Award will be presented throughout the GDF CDI series, recognizing exceptional adult amateurs for either their success in the arena or their contribution to the sport through outstanding sportsmanship or horsemanship.

Each award-winning rider will receive a Piaffe Performance rosette commemorating their achievement, as well as an engraved silver picture frame to hold a lasting memory of their ride and horse.

“I have learned so much from my adult amateur riders about perseverance and commitment,” said Parra who was on the US Team during the past CDIO Nations Cup show at the Global Dressage Festival, and won the Freestyle last year with Van the Man.  “Through this award, I hope Piaffe Performance can play a role in encouraging such riders.  They are the heart of our sport.”

The 2014 Adequan Global Dressage Festival, one of the world’s largest international and national dressage circuits, will feature six CDIs, the only non-championship CDIO Nations Cup in the Western Hemisphere, and five national title events before its conclusion in March.

Cesar Parra, DDS, MScD, operates Piaffe Performance in Jupiter, FL and Whitehouse Station, NJ and was born in Colombia.  Now a US citizen, he was a member of the Gold Medal winning US Team at the 2011 Pan Am Games in Guadalajara.  He also competed in the 2002 World Equestrian Games in Jerez, 2003 Pan American Games, 2004 Athens Olympic Games, 2005 Las Vegas Dressage World Cup and 2006 Aachen World Equestrian Games.

Learn more about training and sales prospects at www.piaffe-performance.com.