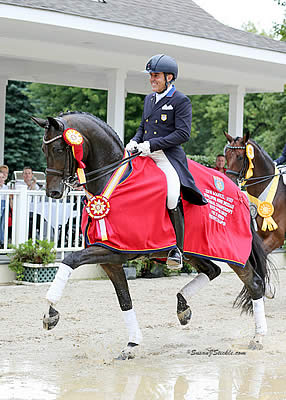 With these successful results, Parra and his team at Piaffe Performance Farm in Whitehouse Station, New Jersey and Jupiter, Florida once again showcased their proven formula for producing champion horses. Since 1999, the team has showcased their commitment to meticulously training horses for high performance by correctly judging the various stages of a horse’s mental and physical development. The team’s proven training program and strong dedication to the proper development of their horses from start to finish is their blueprint for success. Piaffe Performance horses and riders have earned numerous prestigious accolades nationally and internationally.

“I love the Markel/USEF Young and Developing Horse program; I think it is fantastic,” Parra explained. “This program is an incentive to keep training the right way, in the right line, because there are no shortcuts. If you try to rush young horses in these classes without having the basics, then you won’t be successful. The program allows us to set goals, and commit ourselves to keep working towards achieving them.”

“What an amazing weekend! I feel blessed and privileged to have two Reserve Champion horses,” Parra said. “Thank you to my family, my team, all the sponsors, trainers, and colleagues that helped to make this possible. I am so incredibly proud of these two horses and feel very blessed to be their rider.

“When you train horses from when they are young, you sometimes get the feeling like a proud parent when they start to really excel,” Parra continued. “Fashion and Don Cesar are both such special horses, and I knew that as soon as I saw them. I have a saying that you have to believe, and then you have to go to work. Both parts are necessary to bring a young horse along, as there will be bumps along the way for sure.”

Parra and the Piaffe Performance Team added their most recent success to a history of top finishes at the Markel/USEF Young and Developing Dressage Horse National Championships. Both horses have successfully competed at these National Championships in prior years, with Fashion Designer OLD taking his victory lap by claiming the top spot in the Five-Year-Olds division. Don Cesar and Fashion Designer OLD join prior stalemates including Toy Story, Zanzibar, Fiderhit OLD, and Simply Nymphenburg to Piaffe Performance’s resume of horses that have competed at this National Championship.

Besides being a former Olympic athlete and Pan American Games Dressage Team Gold Medalist, Parra has also qualified for the FEI World Breeding Championships for Young Horses in Verden, Germany with Fashion Designer OLD and Fiderhit OLD. In addition, Parra has competed with numerous horses in every USEF Festival of Champions since 2010. Not only has he had his own success in multiple USEF National Dressage Championships, but Parra has also effectively coached youth riders to many National Championship competitions.