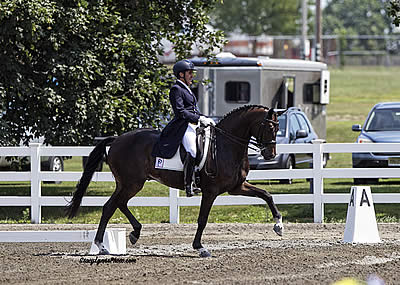 Whitehouse Station, NJ (August 4, 2016) – With two promising young horses slated to compete at the upcoming Young Horse Dressage Championships, Piaffe Performance Farm is poised and ready to show. Fashion Designer OLD and Don Cesar wowed the judges at the recent Windy Hollow Hunt Sussex Dressage I and II held July 22-24 in Augusta, New Jersey, and their scores sealed the deal for their trip to the 2016 Markel/USEF Young and Developing Horse Dressage National Championships at the Lamplight Equestrian Center in Wayne, Illinois, August 24-28.

Fashion Designer OLD, an eight-year-old Oldenburg gelding (Faustinus x De Niro) owned by Martin Sosnoff, notched two first place finishes in the Developing Prix St. Georges with scores of 78.971 percent, and came back to better his score in the qualifying classes, receiving a whopping 80.294, and moving him into first place overall in the rankings for the USEF/Markel Developing Horse Championships.

Don Cesar, a six-year-old Westphalian gelding (Desperados x Sacre Schwalbe, Manhattan), was not to be outdone by his barn mate and posted a first place finish in his qualifying class with a huge 84.800 percent score in the Young Horse Final Six-Year-Old test.

Both horses have been campaigned by Piaffe Performance Farm owner Dr. Cesar Parra. “When you train horses from when they are young, you sometimes get the feeling like a proud parent when they start to really excel,” Parra said. “Fashion and Don Cesar are both such special horses, and I knew that as soon as I saw them. I have a saying that you have to believe, and then you have to go to work. Both parts are necessary to bring a young horse along as there will be bumps along the way for sure. I am so incredibly proud of these two horses and feel very blessed to be their rider.”

Since both horses know the movements for the tests, Parra is readying the geldings for the trip to Lamplight by working on their suppleness, thoroughness and relaxation. Parra is no newcomer to the Young Horse Championships and is a veteran competitor as a former Olympic athlete and a U.S. Pan American Games Dressage Team Gold Medalist. “I love showing at the Markel/USEF National Championships, and Lamplight is a phenomenal facility,” he said. “Every year the owners are putting so much attention into making this show a wonderful experience. Generally, Fashion doesn’t get affected by environment – he is such a self-confident horse! Don Cesar is younger and sensitive, but he really tries so hard to do his very best for me every time. I have a lot of faith in both of these horses!”

Other horse and riders combos from the Piaffe Performance Farm team also excelled at the Windy Hollow Hunt Sussex Show and claimed top wins for the team. Brooke Centrella notched first and second place finishes her first time out competing Belle Ami, a seven-year-old Westphalian mare by Belissimo M owned by Parra and George Feldman, in Third Level Test 1. Austin Webster represented Team Piaffe Performance for the first time aboard three mounts, Dakhir, Blickpunkt, and Kingston. He had beautiful rides and took home the blue ribbon for his win in the Prix St. George on Blickpunkt, an 11-year-old Westphalian gelding by Belissimo M owned by Cavallias. Emma Lesser won both of her First Level Test 3 classes on her own mare Ruby Foxpaw, with scores of 73.235 and 69.118 percent. “We are so proud of her,” Parra said. “All of her hard work and dedication is starting to pay off!”

Team Piaffe Performance has enjoyed many successes and Parra wants to share some of his winning strategies with other equestrians with the re-launch and expansion of Piaffe Performance social media accounts on Facebook, Instagram and Twitter. A new weekly feature called Cesar Parra Recommends (CPR) provides a unique learning experience in which followers can find useful horsemanship and training tips and can learn about top recommended products. Piaffe Performance also encourages fans to tune into “Freestyle Friday” weekly posts for a fun weekend dose of musical dressage. Like them on Facebook at www.facebook.com/PiaffePerformance, follow them on Twitter at twitter.com/DrCesarParraNJ, and find them on Instagram at www.instagram.com/piaffeperformance.