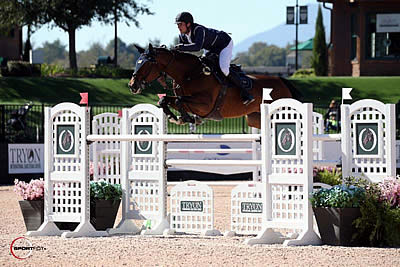 Philippaerts and the 2008 Belgian Warmblood mare (Thunder Van De Zuuthoeve x Donna) owned by Ludo Philippaerts, are a relatively new pairing, he explained. “I actually haven’t had her that long. This is only the fourth show I’m riding her in now. We’ve actually had her for a long time, but it was always an owner that was riding her. I think she looked very good today and hopefully she can still do a few good things in the tour I’m having in the States,” he commented.

The course, set by Anthony D’Ambrosio (USA), was a good one to test the 38 entries, said Philippaerts. “I think the six walked a little longer to the double for the first round, and so I did seven, but for the rest it walked how it was standing. It was a good course.” Sixteen pairs returned to test the short course and nine finished the day double clear.

“I think Inouk P jumped really well in the first round, better than yesterday,” Philippaerts elaborated. “There were quite a lot clear, and I had to go a bit in the beginning [of the jump-off], so I tried to go as fast as I could. In the end, she was fast enough. I was lucky that a few had one rail down in the jump-off, because they were quicker, but she jumped well and I’m happy for today.”

Philippaerts will not be riding Inouk P in the highlight class, but will instead call upon 2006 Zangersheide gelding (Accardi x Corrado I) Aikido Z, owned by Stal Bijloos Bvb. “He was third in the big class last week on Sunday, and I’ve actually been saving him a little bit so he can jump tomorrow in the Grand Prix.”

Despite his busy schedule including competitions around the world, Philippaerts explained that he made sure to spend some extra time in Tryon this year. “This is my last week in Tryon, and then next I go to Kentucky, and then after that Toronto, and then I fly back home for Stuttgart. I came here for the first time last year, but I only did the five-star, so it was good in the plan to come for three weeks this year,” he concluded.

Later in the day, Jason Berry of Verona, VA and Belle Glos, owned by Emo Stables, championed the $25,000 Hunter Showcase, topping 25 riders with a total score of 175. Berry also captured the second place position after both rounds earning a 174 aboard Lee Cesery’s Credence. Caroline Weeden of Lake Forest, IL rounded out the top three aboard Glory Days Farm, LLC’s Just Because, completing their day with a score of 167.5.

Berry piloted both mounts over the courses, designed by Andy Christiansen of Wellington, FL, and ultimately put in the best rounds of the afternoon. “I thought that both of my horses were great today,” commented Berry. “The mare that won, Belle Glos, she’s a phenomenal mare. The second place horse Credence is a six-year-old and this is the first time he’s ever done anything like this!”

“The course rode perfectly. This is the best grass I’ve ever ridden on,” said Berry. “The footing here is perfect. My horses didn’t need any studs and it was great for them.”

Berry competes at TIEC whenever he can. He concluded, “This place is phenomenal. We come here at least twice every year. It’s really a hard show to beat.”