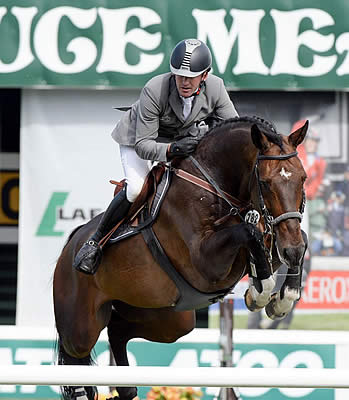 Calgary, AB, Canada – The ‘North American’ Tournament CSI5*, presented by Rolex, continued on Thursday with a win for Germany’s Philipp Weishaupt and Chico 784 in the feature Progress Energy Cup 1.55m at Spruce Meadows. The pair topped a 13-horse jump-off to win over Eric Lamaze (CAN) and Check Picobello Z in second, and Richard Spooner (USA) with Chivas Z third.

The Sun Life Financial ‘Reach for the Sun’ 1.50m was also held on Thursday with a win for Tiffany Foster (CAN) and Brighton. Earlier in the day, young rider Meredith Darst (USA) won the ATCO Cup 1.50m with her horse Quester de Virton.

Spain’s Santiago Varela set the courses on Thursday and saw 20 starters in the day’s highlight Progress Energy Cup 1.55m with 13 moving on to the jump-off. Six entries completed the short course without fault, with the fastest time of 42.08 seconds completed by Germany’s Philipp Weishaupt aboard Madeline Winter-Schulze’s Chico 784.

Eric Lamaze (CAN) was close on his heels in 42.84 seconds to finish in reserve aboard Artisan Farms and Torrey Pines Stable’s Check Picobello Z. Richard Spooner (USA) and his own Chivas Z placed third in 43.45 seconds.

Weishaupt has earned a lot of top finishes this summer, but a win had eluded him until Thursday. The rider from Germany was thrilled to finally get his victory in one of the biggest competitions of the series with Chico 784, an 11-year-old Hanoverian gelding (Cordalme x Sandro) that he brought along from four years old.

“It was so nice to get my first win in the International Ring here, especially in that competition,” Weishaupt stated. “It was one of the highlights of the weekend, and the competition with the second best money of the whole tournament, so I am so excited that I won it. I had a good feeling on Chico in the first round and I thought I would try in the jump-off. I risked a little bit more than I did in the first weeks and I am so happy it worked out.”

Detailing his winning jump-off, Weishaupt noted, “I thought that if somebody went crazy they would beat me, but they had to try hard to get that time. I think I had a pretty good jump-off and Chico is a fast horse. He loves those big grass arenas and he has a huge stride. I knew that if they wanted to beat me they would have to go quick today.”

Before this summer, Weishaupt had only competed at Spruce Meadows in the ‘Masters’ Tournament, but decided to try out the Summer Series this year for the great competition and excellent ranking points.

“I came to Spruce Meadows three or four times to the Masters with the German team,” he explained. “Every year I did very well, I just never had the win. We won the Nations’ Cup two times as a team, but I never had an individual win here, so it feels really good today. It is a special moment.”

Weishaupt recently jumped from 139th to 81st in the Longines FEI World Rankings thanks to his great results at Spruce Meadows.

Commenting on his major move, the rider remarked, “I did not do much for half a year and that gets you to the bottom of the ranking list fast, so that is another reason that I came here this summer. It is a great place to earn points to come up in the rankings. I was shocked when I saw the list that I moved up so much; it was amazing. You have to have the right horses; it does not come automatically. You have to be strong, and you have to have the right horses, and you have to be competitive; otherwise you are not moving anywhere.”

Weishaupt plans to jump Chico 784 again in Saturday’s ATCO Queen Elizabeth II Cup. His horses will then fly back to Germany where he will compete at the CHIO in Aachen.

Concluding the day, Weishaupt stated, “I love Spruce Meadows. Calgary is a great place to compete; the horses love it, the riders love it, and it is just an amazing place. I am definitely coming back again.”

Foster Gets a Win in the Sun Life Financial ‘Reach for the Sun’ 1.50m

The Sun Life Financial ‘Reach for the Sun’ 1.50m jump-off was held Thursday evening with a win for Canada’s Tiffany Foster aboard Artisan Farms and Torrey Pines Stable’s Brighton. Foster and the ten-year-old Dutch Warmblood gelding (Contendro II x Quick Star) topped an eight-horse jump-off out of 27 starters over the Santiago Varela (ESP) designed course. They completed the fastest of six double clear rounds in 35.54 seconds.

Commenting on her winning mount, Foster smiled, “He is awesome. We got him when he was seven, and from right when we first started competing together, he has always been a winner. This year he has actually really stepped into his own. He has won a few times this year and he is just the coolest; I love him.”

Foster has also had many top placings throughout the summer series, and already this week, and was happy to finally win one in the ‘North American’ Tournament.

She stated, “Spruce Meadows is so special in any ring, but especially in the International Ring, and I have been second a lot here. I have been so close so many times. I have been trying to win all of them and I just keep being not quite fast enough. I know with this horse that I can take all of the risk. It is funny, because Philipp Weishaupt and I have been joking that we have been the bridesmaids of this tournament because we have both been second a lot. Then he won the big competition today, and I won this one, so we were the brides today!”

Foster detailed her plan for the jump-off, noting, “I find Brighton a little bit short-strided, so I do not always try the big leave outs. But as has been the case in a few of the competitions that we have won, Eric (Lamaze) said to me, ‘Nope, you can do it, you can leave that stride out,’ and I kind of went with it. If Eric says I can do it, I know I can do it, and it generally works out.”

Foster added, “Every course suits Brighton. He can do anything. He goes forward, he adds, he is so clever, and so quick. His legs move so fast. He is a really cool, very special horse, and I feel really lucky to have him. It really shows this initiative that we have had at Artisan Farms with Andy and Carlene Zielger buying young horses and bringing them along. All of our horses that are so successful, most of them we have started as young horses. They are really patient owners and they have really encouraged us to bring the young horses here to Spruce Meadows and develop them, and then we come back with horses that can win a lot of competitions.”

The ATCO Cup 1.50m jump-off was the first event to be held in the International Ring at Spruce Meadows on Thursday with a significant win for 19-year-old Meredith Darst (USA). The young rider took her very first FEI victory aboard Quester de Virtonafter only jumping clear over her first 1.50m track just 24 hours before.

Course designer Santiago Varela (ESP) saw 45 starters over his first round course, yielding 12 to advance to the jump-off, where Darst had the advantage of being last to go. After watching the early competitors, she stole the lead in 46.89 seconds

Antonio Maurer (MEX) and Mario Onate’s Balarina 3 finished second in 47.56 seconds. Jonathan McCrea (USA) and Candy Tribble’s Brugal VDL placed third in 49.08 seconds. Leslie Howard (USA) jumped into fourth place aboard her own and Peter Howard’s Up & Blue Chapelle in 49.13 seconds, and Enrique Gonzalez (MEX) placed fifth aboard his own Chacna in 49.51 seconds.

Darst, who usually trains in the U.S. with Max Amaya, has had the privilege of being coached by Olympic gold medalist Eric Lamaze (CAN) this summer. With Lamaze looking on, she laid it all on the line with “nothing to lose” in Thursday’s competition.

“It is my first FEI win, so it is incredible,” Darst remarked. “Yesterday was the first time that I was clear in a 1.50m ever. I am just honored to show here, and compete in this ring, and I do not think it has really hit me yet.”

Detailing her jump-off round, Darst explained, “The first half of the course is where I made up speed I think. Eric Lamaze is helping me and he said to go for it on jumps one, two, three, four, and I do not think I have ever gone so fast in my life. I just galloped! Then I took my time a little bit in the end, just because there were harder, more careful parts at the end of the jump-off course. My horse jumped great. He was with me everywhere and I just felt really confident.”

Darst had never even met Lamaze before coming to train with him in Calgary this summer, but has learned a lot in the last several weeks.

“It has been an incredible experience,” she noted. “Eric was like, ‘If you want to go for it, just go!’ And I was not going to say no, so I went for it.”

Speaking of Quester de Virton, a 12-year-old Selle Francais gelding (Kashmir van Schuttershof x Aiglon Rouge) that she has owned for one year-and-a-half, Darst added, “I really just started doing big jumpers when I got Quester. I always did a lot of hunters in the U.S., and getting my confidence up has been enough of a project, but when you have a horse that has all the scope and all the heart it really makes your job easy. I just have to find the jumps. Last year I did a 1.55m here, which was my first big competition on him. I have gotten to know him well, so we are really clicking now, and it is so much fun. He is a really great horse.”

The ‘North American’ Tournament, presented by Rolex, continues on Friday featuring the Pepsi U25 Challenge and the LaFarge Cup 1.50m in the International Ring in the evening.