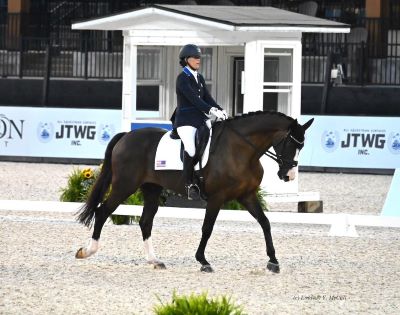 Grade I Competition kicked off with a win for Adequan® U.S. Para Dressage Team member Roxanne Trunnell (USA) and Dolton, 2012 Hanoverian gelding (Danone I x Lady x Londonderry) owned by Karin Flint and Flintewood Farms LLC, after the duo collected a total score of 82.500%. In second place, with a score of 70.059%, was Sydney Collier (USA) and All In One, the 2009 Hanoverian gelding (Abanos x Dauphina x Dauphin) owned by Going for Gold LLC and Katie Robicheaux. Deborah Stanitski (USA) and Skovlunds de Nice, her own 2006 Danish Warmblood mare (De Noir 3 x Miss Kiki x Diamond), received third place with a score of 67.143%.

Trunnell and Dolton have shined in the TIEC competition rings before, but competing under the lights at TIEC provided a new layer of atmosphere to the venue and some cooler temps than typically felt in Florida, she shared. “It was [such a good test!] He was a good boy,” Trunnell recapped. “He felt really relaxed, but forward, too.

“I’ve competed [under the lights] in Wellington, and it’s a lot colder out this time!” The weekend that is also serving as a final observation event for the U.S. Olympic Team selection trials is giving high performance athletes and their horses a practice outing, and Trunnell concluded that she hopes to continue her momentum from her win at TIEC into future rides both in North Carolina and beyond. “Hopefully, [the plan is] keeping the good scores going, and making it to Tokyo!”

Hart and the 2010 Oldenburg Gelding (Fidertanz 2 x Weinrose x Don Romantic) owned by Rowan O’Riley have only danced together under the lights twice now, but her “happy soul” of a young horse took to the atmosphere with ease, Hart recalled. “He is just such a cool horse. He’s really starting to come into his own, which is nice, and he’s just a fun, happy soul. He’s such a pleasure to ride and show because he’s just a happy dude!”

After piloting two horses around the Grade III tests, Hart reflected that she’s grateful that she’s been focusing on fitness lately: “You know, I think it’s amazing that we’re doing this at night to, sort of, simulate Tokyo, [but] I’m really glad I’ve been working on my fitness because these are long days, and with two [horses], it kind of doubles!” Hart went first and last in the Grade III competition, without a spare minute between rides. “But,” Hart emphasized, “it’s an absolute privilege to have two horses at an event like this, so I cannot ask for more than that.”

Para Dressage has been featured at TIEC numerous times throughout the years, but Tryon Summer 1&2 is markedly scheduled to showcase all CPEDI competition at evening hours to simulate conditions that will be expected in Tokyo. After her first tour of Tryon Stadium under the lights, Hart was thrilled with the results she achieved. “I love showing under the lights. Para is really starting to come into its own as an international discipline, so I think any time that we can highlight it and bring it to an event like this, in a venue like this, under the lights and now that we’re able to bring back some spectators, it’s great for growing the sport of Para Dressage.”

Going forward throughout the weekend, Hart will work on achieving increased energy in the ring while maintaining El Corona Texel’s relaxation, but is excited to give “Moolah” more miles under the lights Saturday night. “That was a really good test for him and this is his second time under the lights, so to have him come out and really want to play is a really special feeling,” she concluded. “Huge thank you to all the volunteers and sponsors that are putting on this event and staying into the late hours for us. We couldn’t do it without them, so huge thank you to everyone that’s putting on this event!”

One of the last rides in Tryon Stadium for the night, Shoemaker raved about the evening’s atmosphere. “It’s so amazing in this venue under the lights,” she shared. “I don’t know what it is, but just the way the lights bounce off all the different wood, and the rocks, and the colors, it just makes this amazing atmosphere. The horses are loving it!”

She’s starting to see her homework pay off with “Sully” in the sandbox, she detailed. “We’ve really been working on bringing a lot more power and cadence into our riding. Everything is always behind, [between] what you’re getting at home, and what you’re getting in the arena, and it’s just so exciting right now because I’m starting to get that work in the arena. I think it showed today!”

The only thing Shoemaker will tweak going forward is her warmup routine, she revealed. “We’re trying to figure out what the ideal amount of warm-up time is, just to make sure he’s as ‘through’ as possible. I think today was a little bit short, so tomorrow we’ll do just a touch more and see if we can get a bit more. I’m just so happy to be here, and that Perrigo is sponsoring, [and for] everyone here at Tryon, the USEF staff, and everybody’s personal support staff. It’s amazing what goes into putting this on, and I’m super thankful,” Shoemaker concluded.