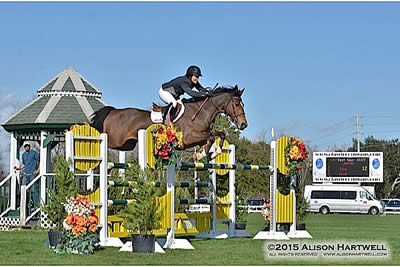 It was ladies’ day at the Gulf Coast Winter Classic! A field of world class, high performance grand prix riders, all of whom are women, competed for the cash in the $25,000 Foley RV Center Grand Prix, presented by EMO.

Eight advanced to the jump-off, but it was Penny Brennan of Ocala, Florida and her own Japan who took home the championship honors.

The grand prix course was very welcoming and the crowds gathered around the world class grand prix arena under beautiful sunny skies.

The jump off time was set at 45 seconds. Holly Shepherd of Grand Bay, Alabama was first to go in the jump off in the irons of Dejan Krunic’s Belle Clara DKS. The pair finished clean and set the new time to beat at 33.177 seconds.

Amanda Forte of Glenmoore, Pennsylvania followed Shepherd in the irons of HHS Louis, owned by Cerulean Stables, LLC. While the pair turned in a clean round, their time of 37.028 seconds would see them finish in fifth place overall.

Brennan and her own Sun Tzu entered the ring and turned in the fastest four fault round in a time of 31.352 seconds which would see them finish in sixth place overall.

Tiffany Cambria of Middleburg, Virginia followed aboard Vavoom, owned by Amanda Hood. Their fault free jump off round in a time of 34.781 would see them finish in third place.

Jordan Gilchrist of Flower Mound, Texas followed Cambria with Anna Beth Athey’s Balizo. A rail at the second to last fence in the jump off round in a time of 34.433 seconds led them to the eighth place finish.

Forte returned to the ring, this time in the irons of Rincola Black Adder, owned by Cerulean Stables, LLC. Their fault free round in a time of 35.947 seconds saw them finish in fourth place.

Brennan was back, this time in the irons of her own Japan. Brennan put the gas on and finished clean in a time of 32.760 seconds, taking the lead.

Shepherd had one more ride to go and entered the ring in the irons of Loretta Patterson’s Triompf. Triompf and Shepherd are regulars in the Winner’s Circle so all eyes were on the pair as they took to the field. A rail at the second to last fence gave them four faults in a time of 32.842 seconds, which would see them finish in seventh place overall.

“The crowd was thrilled with the lady jockeys today,” commented Janet McCarroll, Gulf Coast Classic Show Coordinator. “Everyone was tail gating, petting the miniature ponies out there and just having a great time,” she added. “We hope everyone comes back every weekend and joins us here for more show jumping action!”