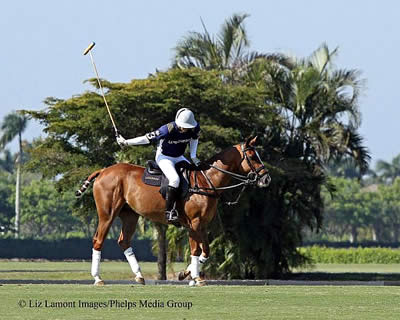 Wellington, FL – February 13, 2015 – The Ylvisaker Cup 20 goal quarterfinal pairings have been determined by shootout on a brisk Friday morning at International Polo Club Palm Beach (IPC). Mark Tomlinson of Casablanca and Sapo Caset of Valiente proved to be the deadeye shooters of the contestants. By virtue of ranking, the Pieres brothers Facundo and Nico will be facing each other in a knockout match in Quarterfinal Four.

All five teams in the shootout had previously qualified for the quarterfinals, so the shootout was held to determine ranking between the three teams (Casablanca, Lucchese, and Villa del Lago) tied at 2-1 in the Bracket I/II cross section, and between the two teams (Audi and Valiente) tied at 2-1 in the Bracket III/IV cross section. Low-ranked teams would have to face undefeated teams Coca-Cola and Orchard Hill.

In the first shootout between the Bracket I/II teams, Julian de Lusarreta for Villa del Lago, Nico Pieres for Lucchese, and Mark Tomlinson for Casablanca were gunning from the line. All three players converted from the 40-yard line. Players moved back to 60-yard line. De Lusarreta sank his shot, but Nico Pieres suffered through watching his shot hit the goal post and bounce back to the middle of the goal area, inches away from crossing the line. Tomlinson proceeded to drill his next shot, leaving Pieres and his Lucchese team in fourth place facing brother Facundo Pieres and Orchard Hill. De Lusarreta and Tomlinson dueled through two more shots from the 60-yard line. Tomlinson emerged the victor and placed 18-goal Casablanca, the underdog team which entered the tournament four days before the first game, in second place in Bracket I/II.

The upcoming quarterfinal between Lucchese and Orchard Hill will be a rematch of the epic Joe Barry Cup semifinal that was won by a single goal off the mallet of Facundo Pieres.

“We are looking for revenge from the last tournament,” said Nico Pieres.

The second shootout between Bracket III/IV teams Audi and Valiente proceeded quickly. Both Fred Mannix for Audi and Sapo Caset for Valiente made the shot from the 40-yard line. Mannix sent his shot from the 60 yard line sailing high, but wide, over the goal line. Caset calmly put his 60-yard shot down the middle of the goal, elevating Valiente into a third place ranking in Bracket III/IV.

Sunday will be an exciting day of quarterfinal matches at IPC, as eight top notch teams will be battling it out for the right to advance to the Ylvisaker Cup Semifinals.