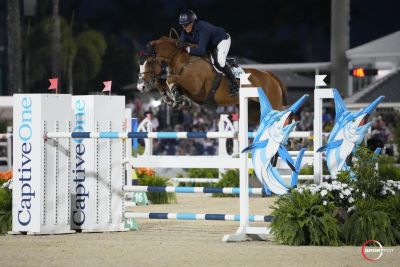 Competition for “Saturday Night Lights” during week 11, sponsored by the Palm Beach County Sports Commission, of the 2022 Winter Equestrian Festival (WEF) was packed with action during the circuit’s penultimate week. While hunter riders had the opportunity to take center stage on the Derby Field at Equestrian Village over the weekend in both international and national derby events, show jumpers took to the Wellington International Arena to compete for the top prize in the $140,000 CaptiveOne Advisors 1.50m Championship Jumper Classic Final. In a mad dash across the finish line, Paul O’Shea (IRL) and Chancelloress claimed the leading spot.

The night culminated with both an overall series champion as well as the final class winner. Spectators in the night’s crowd were treated to extra excitement as the new name of the venue, Wellington International, was revealed prior to the first horse on course. Course designer Olaf Petersen Jr. (GER) raised an impressive challenge to the field of 48 starters representing 17 nations, and only five of the original entries managed to earn a slot for the short track. The jump-off came down to a battle between the U.S. and Ireland as Spencer Smith (USA), Laura Kraut (USA), and Alex Matz (USA) took on countrymen Mark McAuley (IRL) and O’Shea.

With three to follow, McAuley was the first to produce a double-clear effort in a tidy time of 36.97 seconds aboard LT Competition’s 10-year-old CH mare O’Hara ELS (Ogano Sitte x Liandero). However, the taste of victory didn’t last quite as long as hoped when O’Shea immediately followed and shaved over a second off of McAuley’s effort in 35.51 seconds.

“I knew Alex would be fast, and that Laura was after me too,” explained O’Shea. “I didn’t get to see Mark go but he is always fast, so I just tried to do the best round that I could.”

O’Shea credited his mount with rising to the occasion for the class and has high hopes for the end of season with the Trelawny Farms’ 13-year-old Hanoverian mare (Chacco-Blue x Balou Du Rouet).

The Irish also took the overall victory of the CaptiveOne Advisors 1.50m Championship Jumper Classic Series as Shane Sweetnam was named the leading rider through the entirety of the circuit. Despite never having worn the winning cooler, Sweetnam’s consistency and six top-five placings throughout the season with four different mounts was enough to earn the honors.

As top hunter riders took their final turn on the turf at Equestrian Village, Jimmy Torano once again led the lap of honor across the grass as he claimed yet another victory aboard Isalou Inc.’s Laskano. Thirty of the country’s best hunter riders donned their shadbellies astride perfectly manicured athletes for the $50,000 USHJA International Derby. The competition was down to the wire but ultimately, as the pair have done repeatedly throughout the WEF season, Jimmy Torano and Laskano emerged at the top of the elite field. Torano and his talented mount held one of the top 12 coveted spots from the start and returned as one of the final few pairings to contest Ken Krome’s handy course.

Looking on to determine the class winner were Bob Crandall and Ken Krome from the Panel One judges box and Rob Bielefeld with Melissa Bark for Panel Two. Krome designed a handy phase worthy of its opponents that included multiple rollbacks, a trot fence, and a two-stride combination in a bending line to a bounce. Competitors could earn four additional points for high options and were rewarded with extra points for handiness.

The top 12 returned in reverse order and after returning in the tenth-place position, Hannah Isop put the pressure on the remaining riders when she and Red Ryder, an 18-year-old Selle Francais gelding, scored a total of 210 for their efforts in the handy. The massive score catapulted Isop into the lead and put the pressure on Torano to display another flawless effort.

Kelley Farmer took the yellow ribbon honors aboard a horse that is competing for the first time in the U.S.

Torano was not going down without a fight, however, and he gave it his all with the 10-year-old Westphalian gelding to earn another incredible score over the 200-mark with a total of 206 points from the respective judges. The round once again led the field, and Torano piloted Laskano to an overall score of 393 points.